During my time as a member and more recently an admin of the forums, I've found myself increasingly aware of the number of frequently asked questions that members, albeit newer members, post often in individual threads that do clog up the forum and are eventually deleted by myself or one of the other admins. I thought that with the help of the more senior members and others who often answer the numerous questions posted, I would help out the newer members out a little. If any member wants to add something to this thread, just PM me the question and some directions, I'll take it upon myself to ensure that it becomes a part of this FAQs. Or any admin can unlock and add more content to this thread.

This FAQ consists of the following topics.

How to upload pictures to Oz Nerf
1) Go onto OzNerf.com 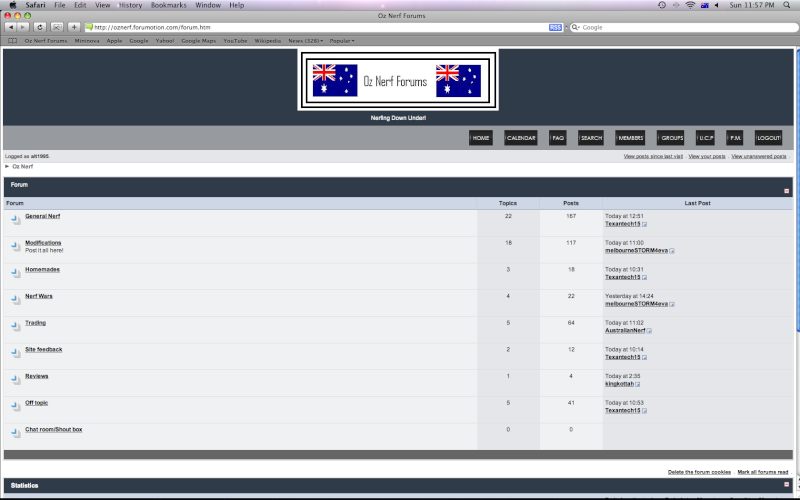 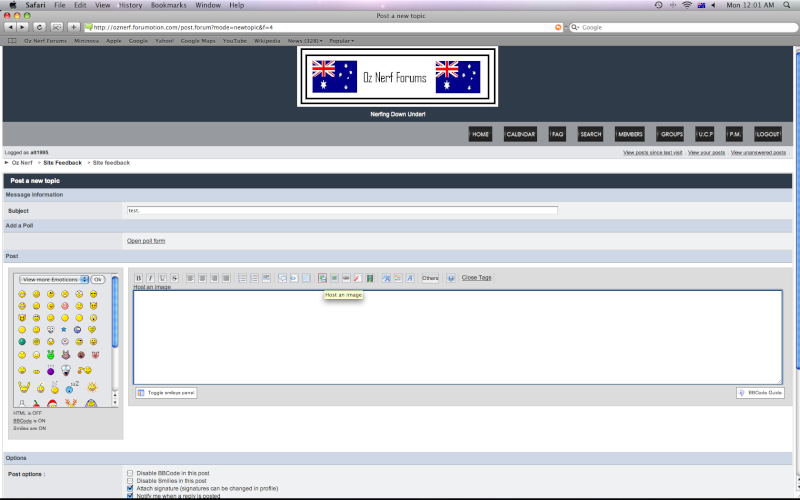 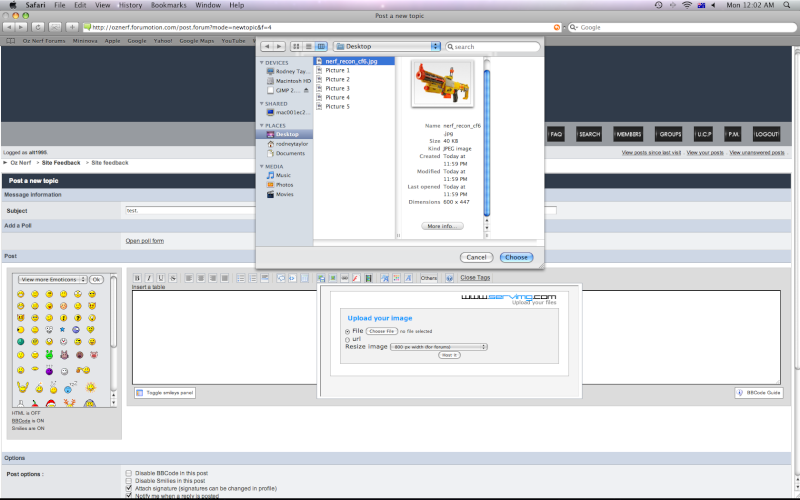 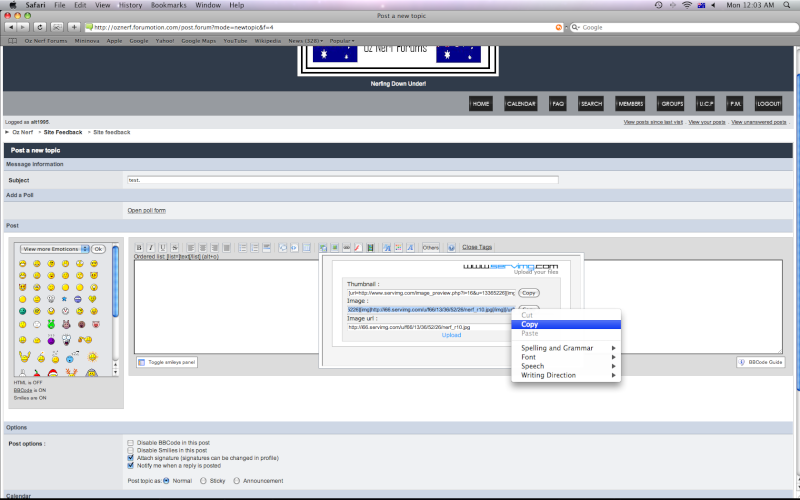 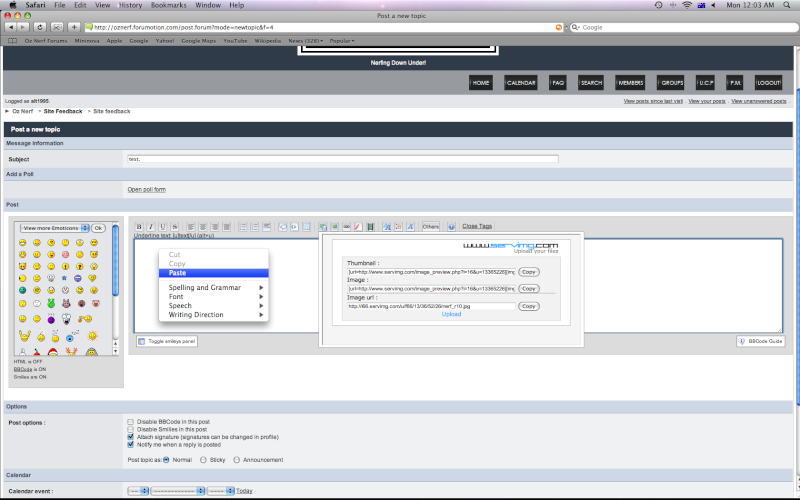 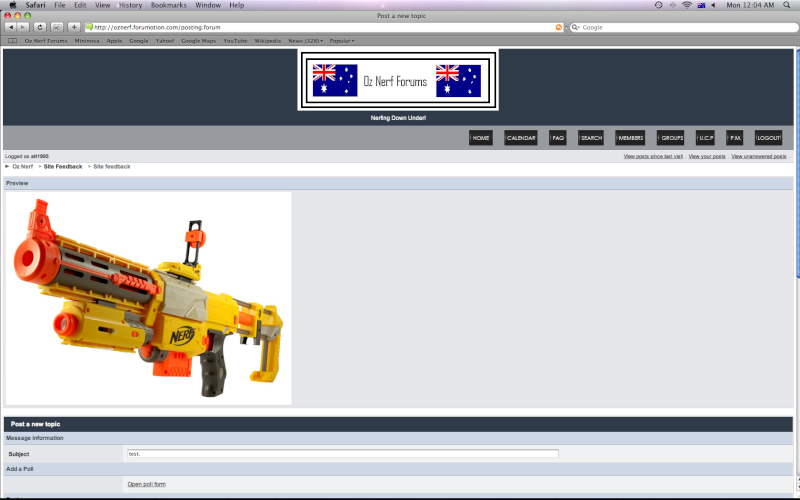 How to use the EDIT button to avoid double posting

The EDIT button is located at the bottom of every post that you put up, and is in the bottom right hand corner. Click the button and you can change the post, add images, links or texts, or even edit the post!! 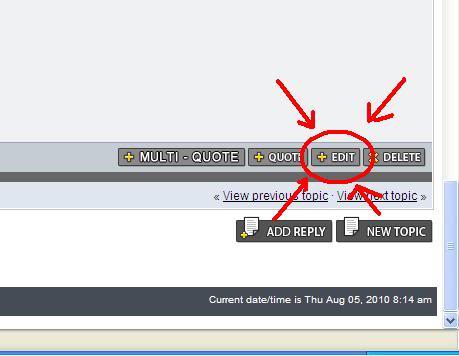 How to remove the Bolt Handle

1) Once you've gotten to the stage where you need to remove the Bolt Handle/Priming bar/Whatever,

2) Slide the Claw hammer so the claw end sit with the bar in the webbing of the claw. For the easiest place to move the hammer, align hammer so it is parallel to the slit in the shell.

3) Lever the hammer until the bolt handle pops off. It helps to give the hammer a quick and firm jerk to dislodge the handle. If the removable section is on the otherside, it should pop off. If you really think that it will not pop off, try the other side. The closer the claw is to the catch inside the handle the easier it will come off.

5) Unscrew those two screws and take out the circular plate that the screws goes into.

6) Sand down the internal surface of the four prongs that I've drawn onto my chest, until the bolt locks and you can easily pull it off.

How to paint your Nerf Gun

1) Clean the gun with warm soapy water to remove and dirt, dust or debris that might be on the surface of the shell. Dry the shell, either by patting it with a soft colth or towel, or allowing it to dry.

2) Lightly sand the area to be painted, this helps the Paint Primer bond to the plastic by creating a rough area to stick to.

3) Apply 1-2 layers of Undercoat or Paint Primer, preferably suitable for plastics and polymers. And let it dry completely.

4) Sand the layers of Primer lightly, and blow the dust off the shell. Wash the shell if desired.

5) Paint areas with desired colours, a minimum of 2 layers. Let each layer dry completely before continuing and remember to lightly sand between the layers of paint.

6) Finish the paint job with a coat of clear matte varnish to seal in the paint and to increase the life of the job. It also prevents the paint from cracking or peeling.

Things that shouldn't be painted include the trigger and any internal components. Why? Because these parts need to move freely and paint layers will make them too thick, and as a result they won't move freely as they should to maintain their original function.

When deciding on the foam for your stefans, please note that the foam fit is very important for optimal performance from your nerf gun. It is also important to realise it is not what foam you should be getting to suit your barrel, but what barrel you should be getting to suit your foam. It is because your foam is a certain diameter thick and will be replaced constantly, you want your barrel to be able to have the same fit on the foam.

NOTE: Please use 9/16th 0.014" walled Brass tube if you are using the 8G snapcaps (with a brass breech), without tightening rings. Once the mainstream turn to silicone tips or 6G snapcaps, you can add the tightening rings.


Where can I buy Foam/Barrel materials?

13mm FBR can be purchased in Adelaide at Bianco Building Supplies.

Blue foam and PETG can be purchased off Inf0rm3r via his Sales Thread .

16mm Aluminium Tube can be purchased at Bunnings Warehouse.

Brass tubes can be purchased at Toyworld and local hobby stores.

16mm UPVC can be purchased at Mitre 10, Home Hardware and some Bunnings Warehouses.


Why are different barrels needed for Airguns or Springers?

For airguns, where the majority of the guns are based off range and high exit velocities, the length of the barrel is very important as it directly contributes to the accuracy of the gun. Most airgun barrels are a minimum of 30cm which is alot of friction along the inside of the barrel, this is why a slight loose or perfect fit is desired.

For springers with a large plunger volume such as Longshots, the same principle applies because of the large burst of air is so similar to that of an airgun. The NF and stormfire count as large volume although they tend to work better with a relatively short, but tight barrel - 17/32" brass is idea with a barrel length of 1.25-1.75 of the stock dart length.

For springer with a relatively small plunger volume, such as all reverse plunger guns (yes the output volume is small), the minimum ammount of friction is wanted though maintaining the maximum pressure behind the dart. That's why a perfect fit is desirable.

- 0.5mm Aluminium Sheet (can be bought from hobby stores or bunnings)
- 3 Day Super Strength Epoxy Resin ($10 at bunnings or k-mart)
- Boltsled (from your longshot...)
- Pliers (needle nose and the fatter kind o.O)
- Permanent Marker
- Scissors (to cut out the sheet)
- Some hand-eye coordination...

Picture below for people who love pictures. 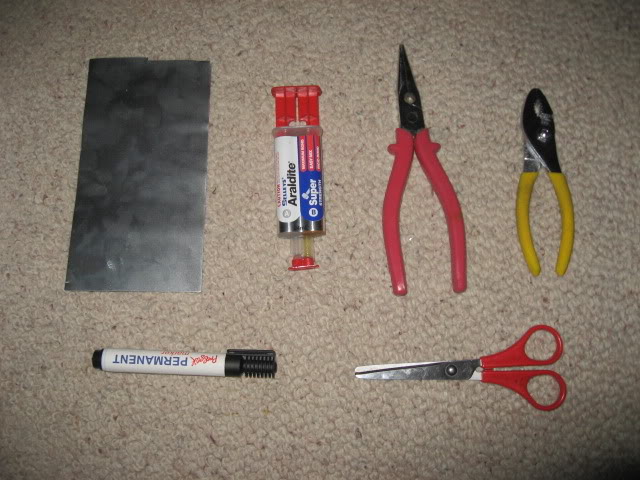 Place your aluminium sheets and trace it around your sled with a permanent marker. Make SURE you cut OUTSIDE the permanent marker, not inside it, You will understand why later on. 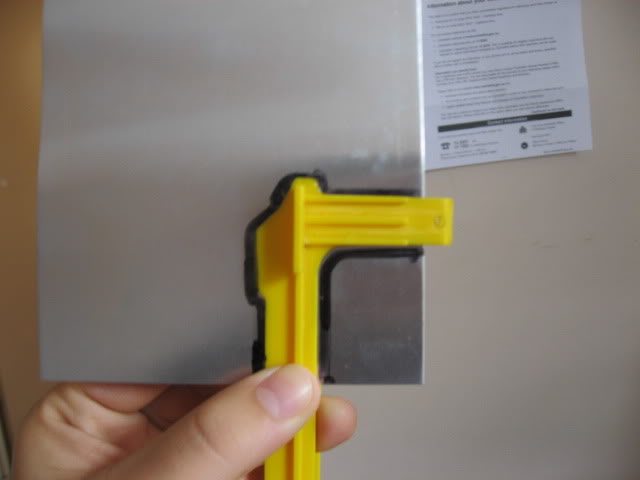 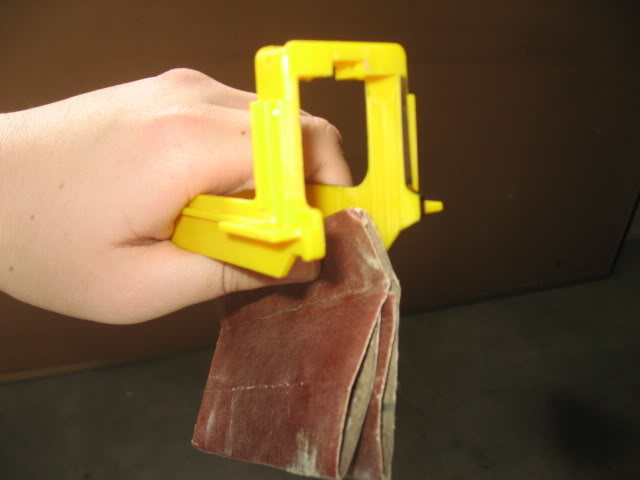 Shape your aluminum with the pliers to make it fit nicely on the sled joint. 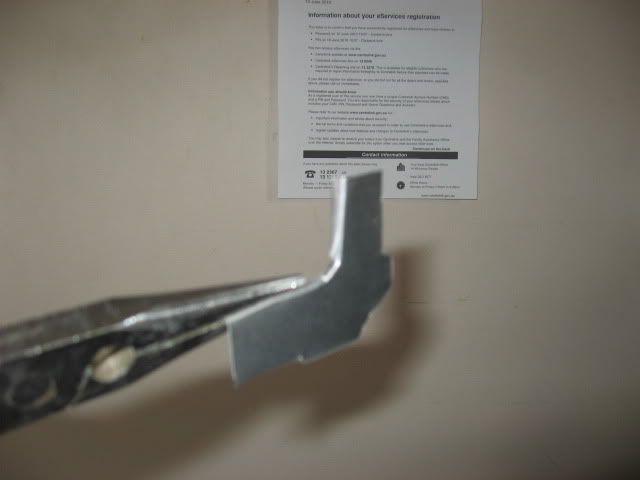 Wash plastic under warm water do get rid of the dusty sanded plastic which may get in the way with the bonding. Don't do it with aluminium, it will rust. Pat it down to dry it down with some paper towel 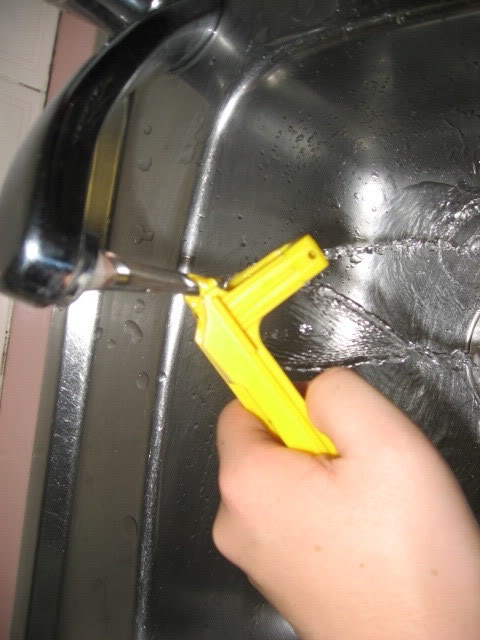 Mix 3 day epoxy together and put it on both the plastic and aluminium sandwiching them together. 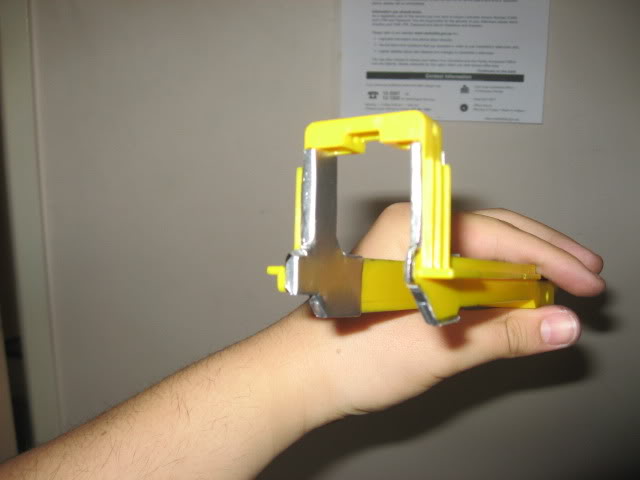 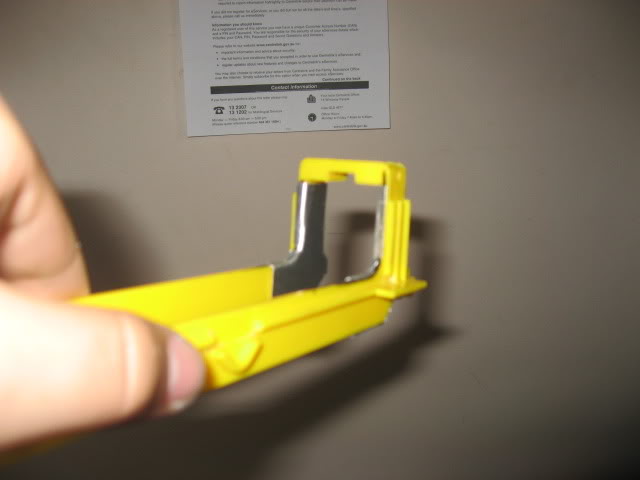 I have tested it, it does work in the Longshot, but there is a very thin margin of error if you don't do it properly it won't run smoothly on the guide rails.

This is a write-up for reinforcing the bolt sled of a longshot, which is prone to breakage if springs are added. Most of the stress is put on the "L" joint where the horizontal parts meet the vertical segments. That's what gets reinforced in this write-up.

First take some coat hanger wire and bend it at a 90 degree angle or as close to that as you can get it. Make sure the wire gauge is thin enough so that when adhered to the vertical segment of the bolt sled, it doesn't protrude out of those brackets. You'll see what I mean it a little bit. My wire was a bit too thick, and that will be addressed later. 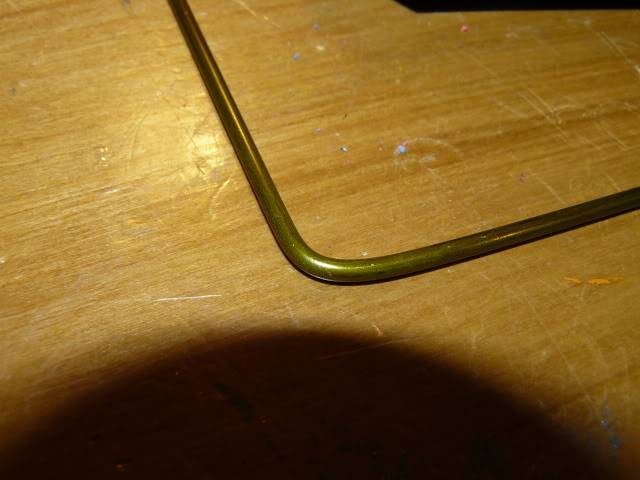 Now cut it so its the same size as in the following picture. 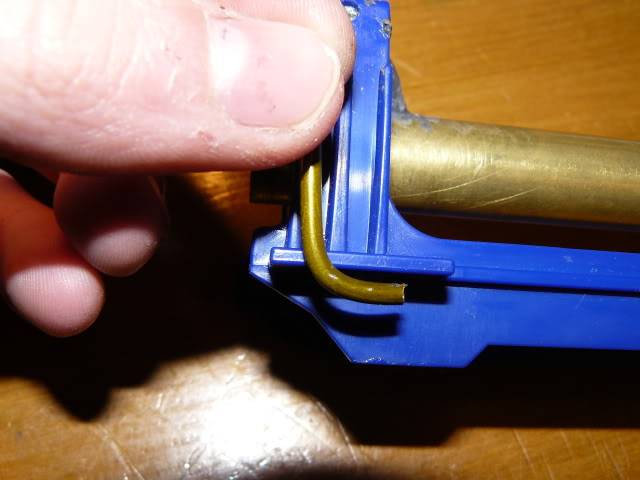 Drill a hole in the bolt sled as shown to allow the wire to pass through. 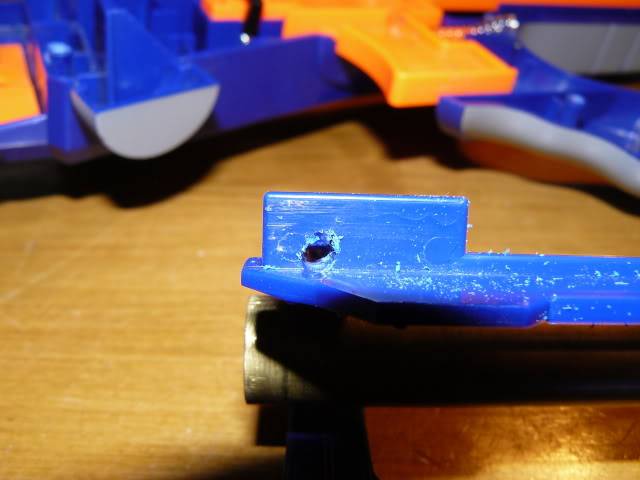 This is how the wire will be epoxied in. 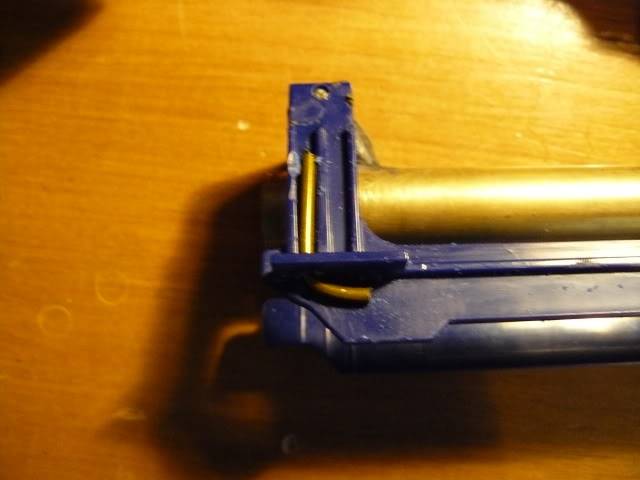 Do the following step if your wire, like mine, protrudes from the vertical nubs that house it. If it was left protruding then your bolt sled won't slide properly across the LS shell. Basically just shave down the plastic where the wire will be resting. I just used the same bit on my dremel that I used initially to drill the hole, and just slid the tip across the plastic. 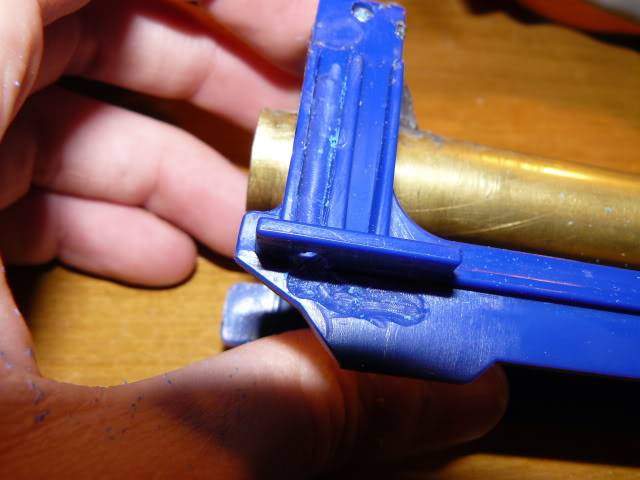 Now just epoxy it in. 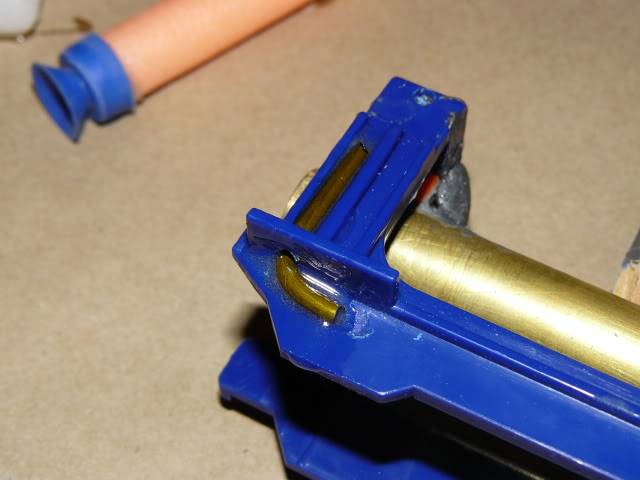 Now do the other side. Sand down any overhanging epoxy. I will do that once the epoxy dries.

New Step:
After looking at some broken bolt sleds, I decided mine needed further reinforcements. 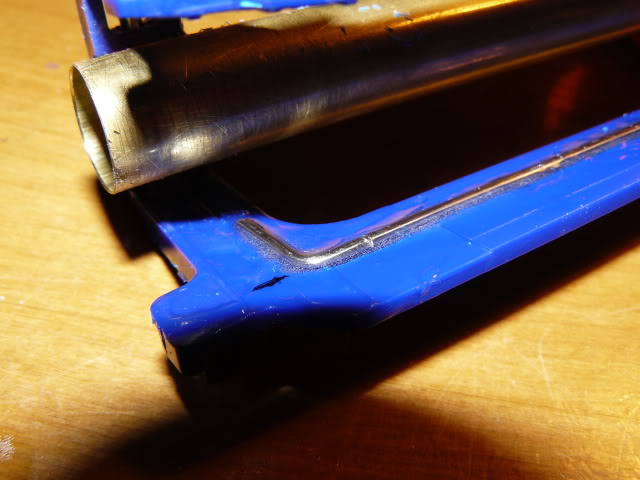