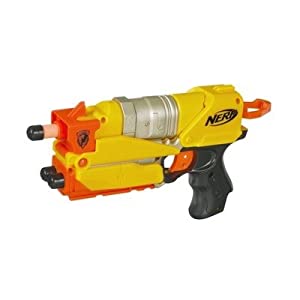 ::OVERVIEW::
The Switch-Shot EX-3 comes either alone or bundled with the Nerf video games. It has two trigger paths, one that leads toward a lever that presses the Wii's B button, and another that goes toward a hook that activates the Nerf gun. This blaster is changeable to either the Wiimote or a Nerf blaster.

In the video games, the R.O.F is different depending on which blaster you are using... When using it as a blaster, it is simply loading and shooting, I can get in around 2 darts per 5 seconds.

::RANGE::
Bad part, I can only get around 30 feet with stock. I have not tested it with AR's removed or AOS removed.

::AMMUNITION::
3-dart holder, one being the barrel. Two darts if you have a wiimote in, and unlimited if you are talking about the video game.

::MODS::
I cannot find any way to mod this, you, however, may be able to. This is why I have not tested without AR's, the entire pump is connected to the barrel without any screws, so it is a pain to get them out, and I have not.

The Switch Shot EX-3 is a nice little touch for your Wii Nerf games and others. (such as Duck Hunt and Wii Play) However it lacks much modding opportunities and cannot be painted well due to the Wiimote attachment. I recommend this blaster for your Wii, not for any wars or even normal Nerf play.

Thanks for reading the review, all your flames, comments, suggestions below.
~Red
Chaos-Blades

I've got a couple of AR-removed ones and they get about 50ft with stefans, you can unscrew the plunger-section (unless the new ones are glued together) to get inside it & once you're in, it's pretty easy to modify, pretty much the same mods as a nitefinder.