Aaaaaaand the Wiggleon. I call it this because, you know how in Pokemon, Wigglytuff is SUPPOSED to be all cool and menacing but REALLY isn't? Weeeeeell... 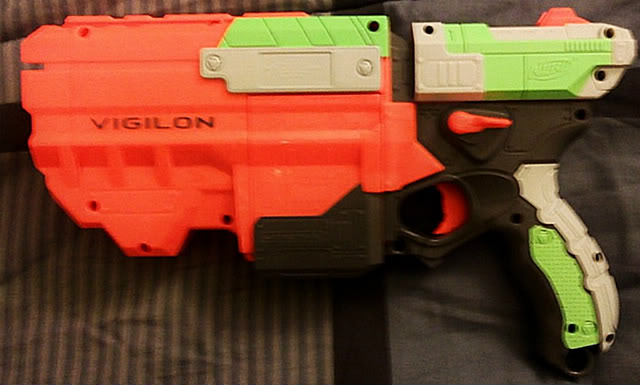 Disk Capacity: 5 Disks Advertized, 6 if you cock it before loading, 7 if you push it a little.

Features:
- Loads via an auto-loading spring-fit interior disc chamber, and cocked via the slide.
- Multiple safety stages; cannot dry-fire, cannot pull trigger without cocking or while cocking, cannot cock or fire while loading door is opened.
- Aforementioned loading door is spring-loaded and can be opened by pressing the levers found on either side of the gun.
- Carry-Loop in Handle.
- 1 Tactical Rail on top compatible with all N-Strike and Vortex accessories except Stampede Shield.
- Anti-Jam Lever; press, hold, and tip forward to release jammed disks.

Notes: I start by saying this is all entirely just my opinion. This pistol is probably supposed to fill the “Maverick” spot in the lineup; it’s roughly the same size as the Maverick, is Slide-cocked, and is the next price-point up from the mini. Only one problem; the Maverick was cool-looking and easily modded. The Vigilon looks stupid and is apparently difficult to modify to boot, so say a few lucky people who got the gun before David and I did. The amount of dead space in this gun is legendary and unavoidable; the entire front section is just a tube and hollow space, with one spring mechanism near the tip- and that’s it. You can’t cut it off or fill it easily. So that’s an issue. The rest is just a holding bay for the disks. It would be easy to forgive if the entire front of the gun wasn’t a single color with very little detailing. This is the kind of thing I’d expect from Buzz Bee, and THEY aren’t charging fifteen USD for a pistol that gets hardly any more range than their bottom tier. Granted, the magazine spring-door is really cool, and it’s nice to see the slide-cocking so smoothly implemented, and this thing will beat the Proton every time thanks to its increased ammunition capacity- but overall, it’s just really bulky and ugly and really slow for a slide-loader. Even worse, it’s meant as a sidearm. Screw that. Buy if you dare, otherwise downgrade to the much cooler Proton and make Drac’s Grav Mag, or upgrade to one of the rifles.
retrias

waiiiitttt, Wigglypuff ? MENACING? I never heard of this kind of design intention, well I like the basic outline of the gun, although not the details on it.I do wonder what is the future for dart guns, considering the disk flies further stock or modified
ZeusPwns

Nice review Indeed! +1, now I'm just waiting to see if the Nitron is any good.

ZeusPwns wrote:Nice review Indeed! +1, now I'm just waiting to see if the Nitron is any good.

Retrias: Yeh, well... is like I said, the Notes section is purely opinion. And frankly, most of my aesthetics qualms were because, before I knew the details of the internals, I had already come up with the plan of what I was gonna do with it: 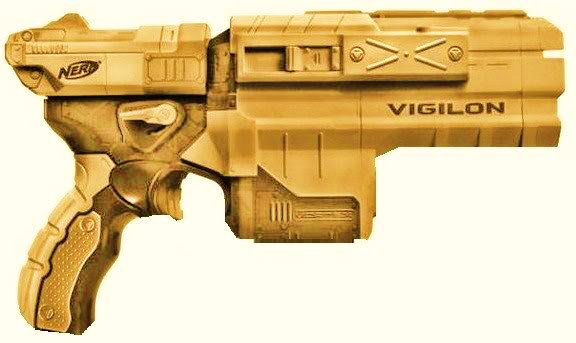 ... and now my grandoise plans are dashed and I'm a bit tender about it, since I was actually looking forward to the Vigilon most of all just so I could make this pistol. From all internal shots I've seen, it would actually render the gun completely useless. >.>
tanger32au

I got one of these last night myself, very nice.
Sponsored content