This the Mortar Pistol from TaoBao which I was fortunate enough to get from Psyk in Singapore. 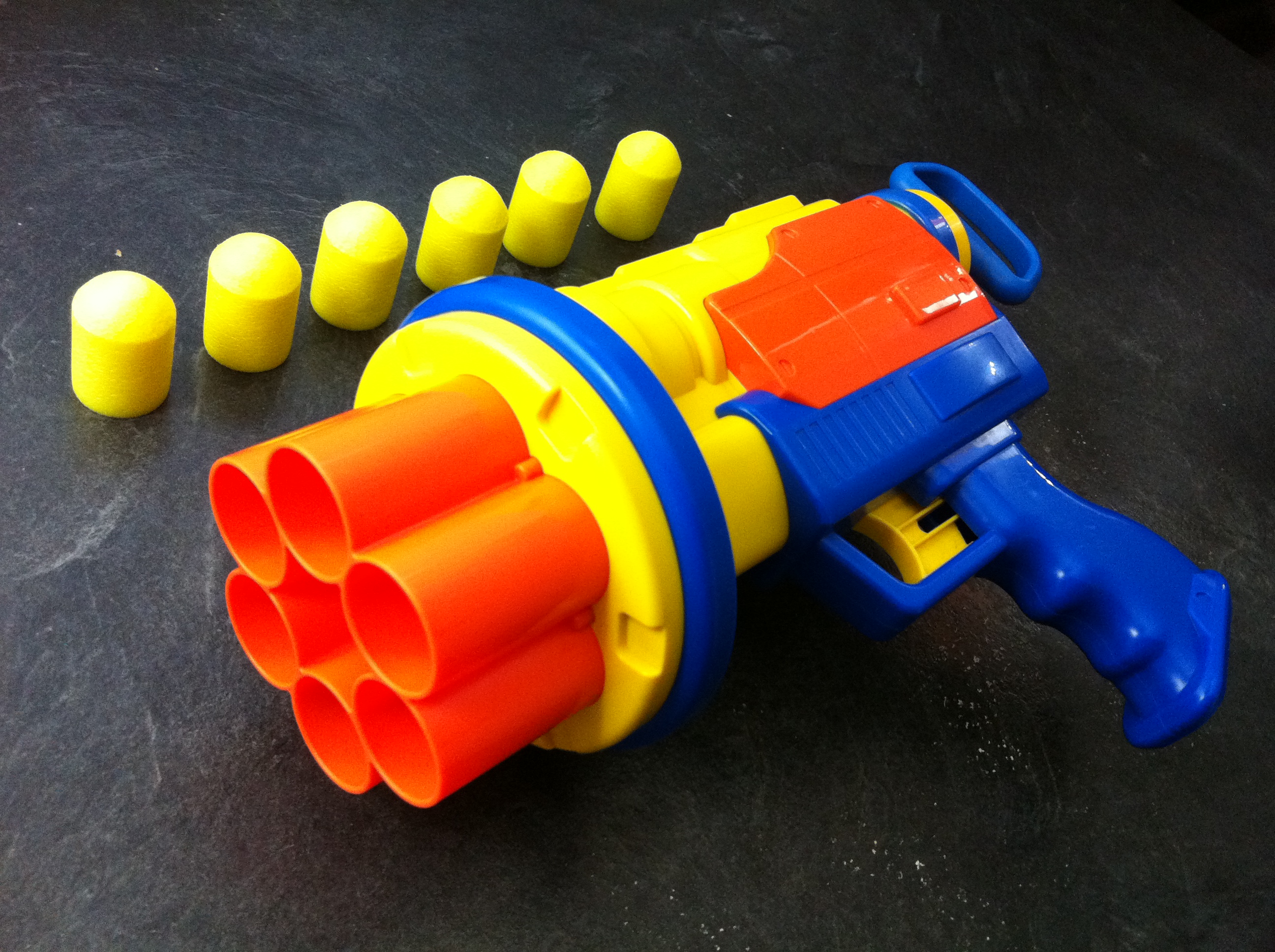 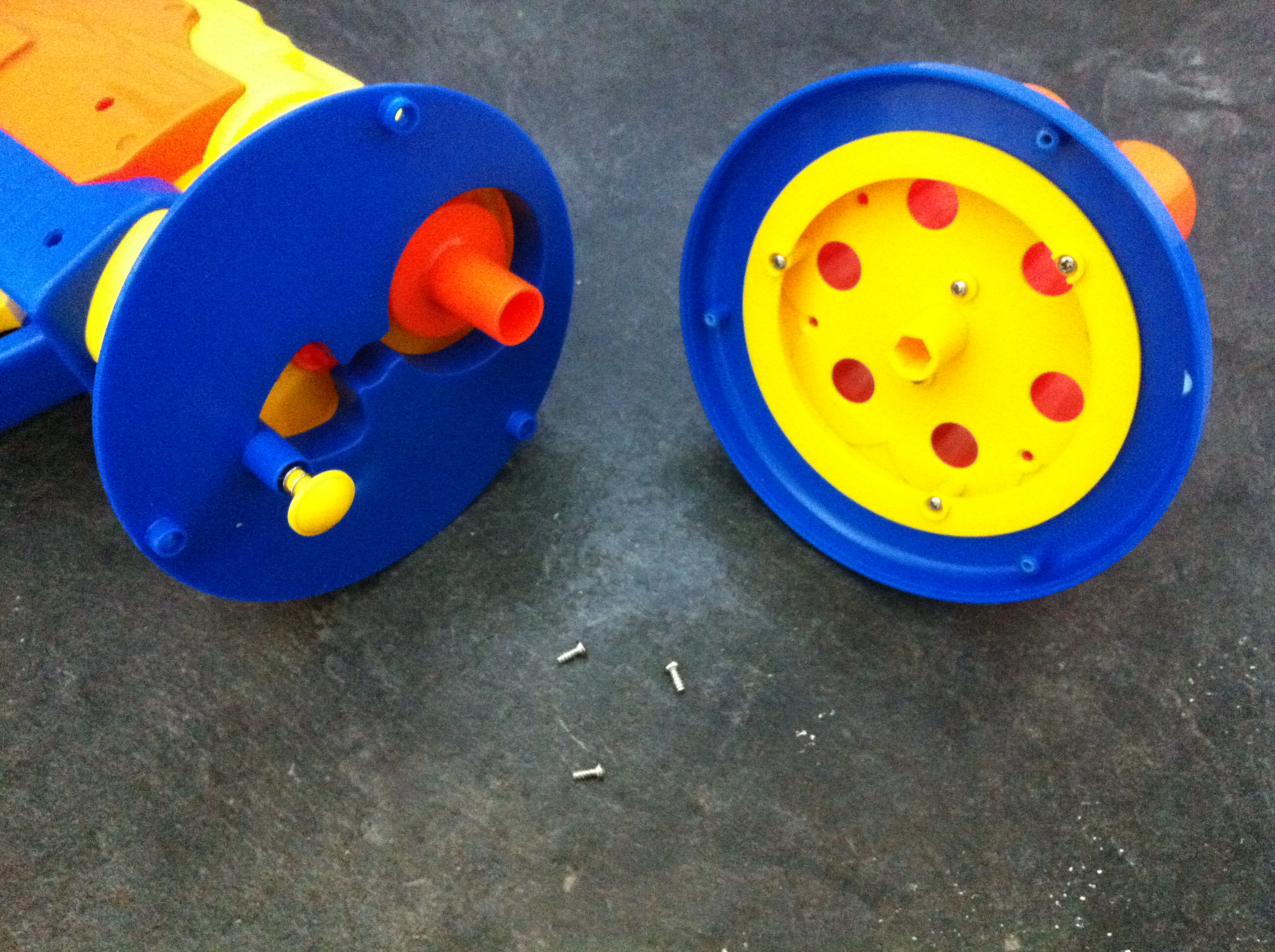 Although the turret is manually rotated, a sort of slip-catch locks the turret in correct alignment utilizing a ball-like device and spring. 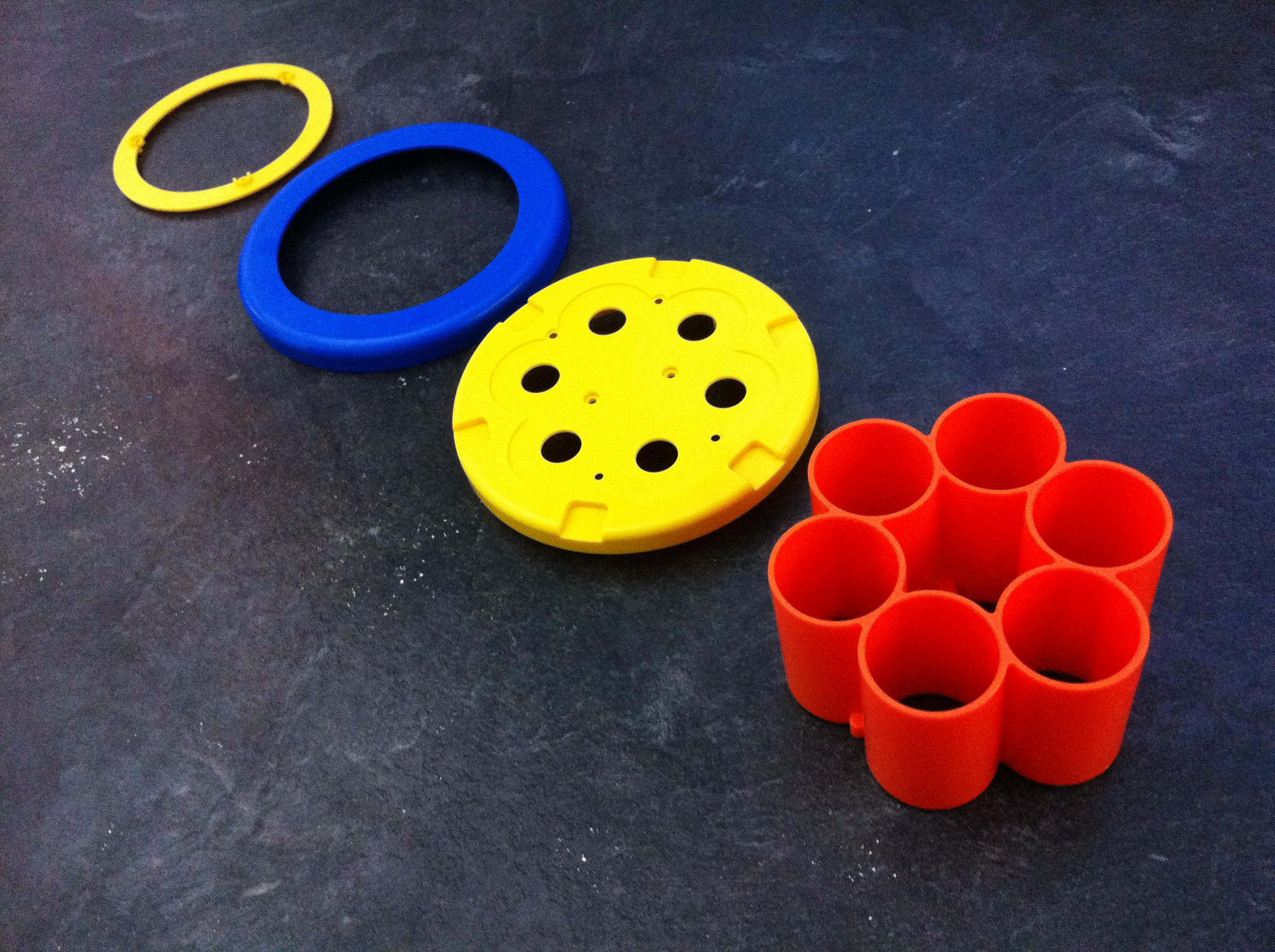 The turret comes apart easily enough. In fact, the entire blaster comes apart as seen in the following photos. 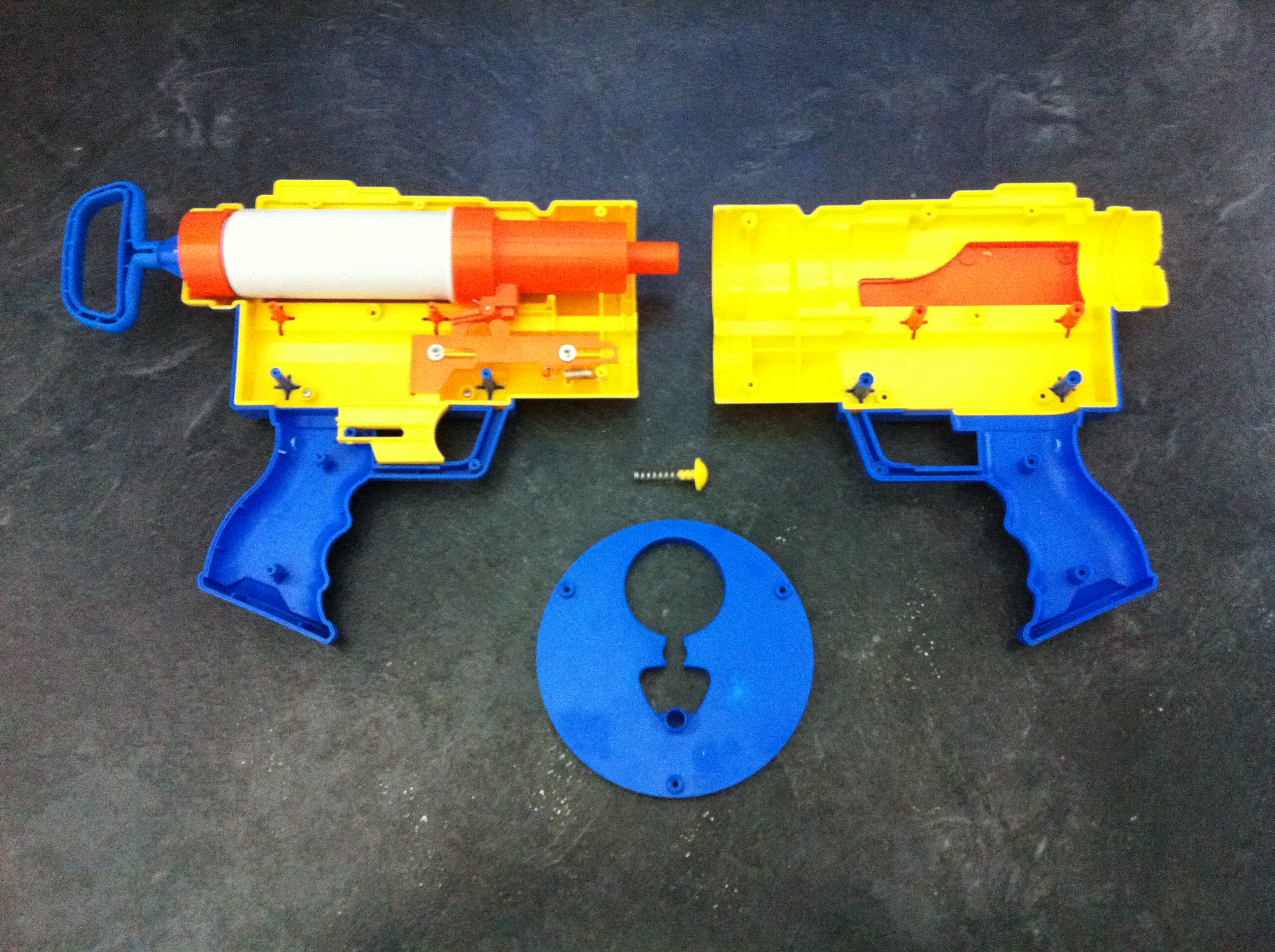 Interestingly enough, upon closer examination, it appears that it was originally designed to have a rotation-mech as seen in the photo above. 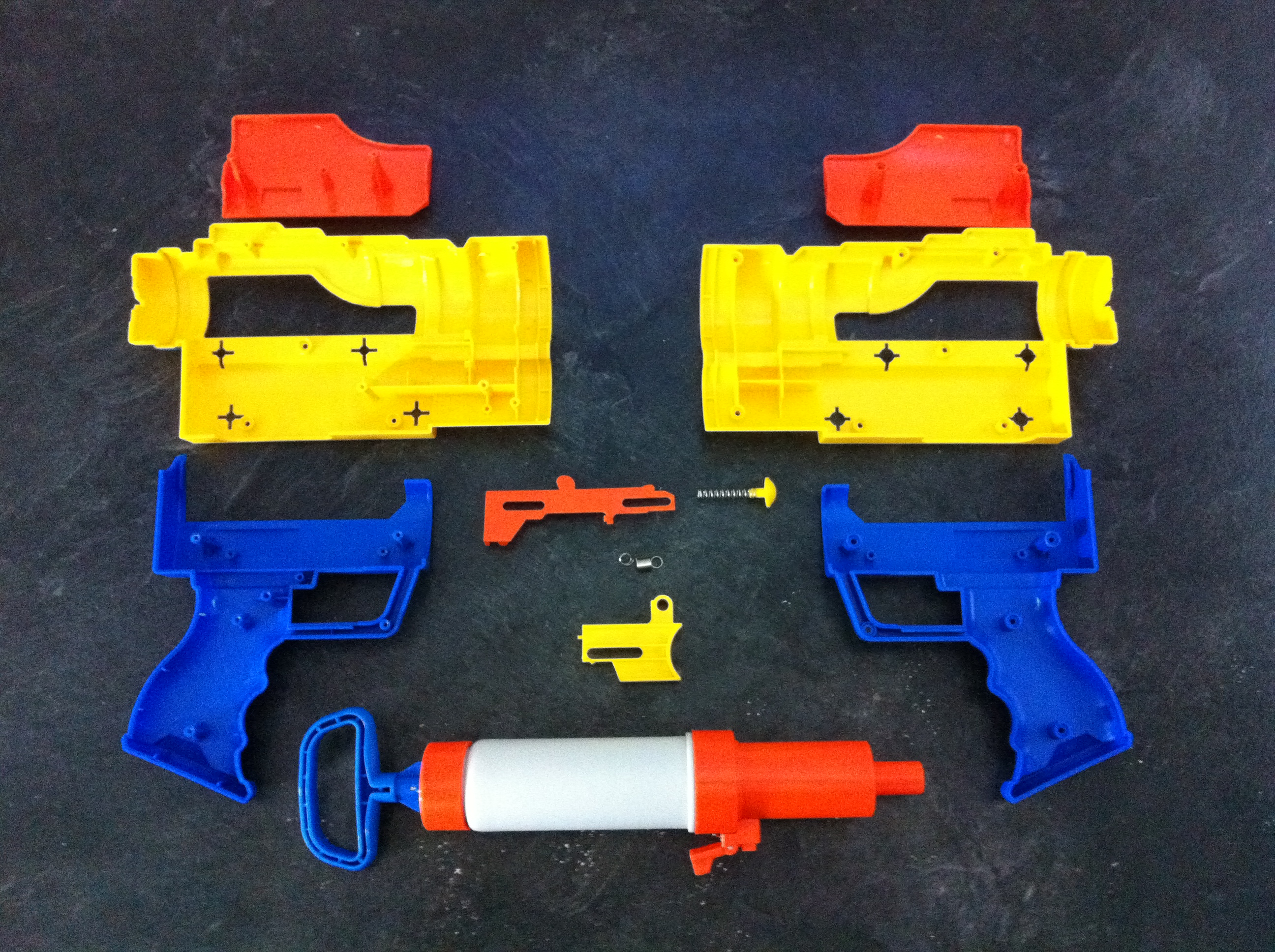 The only thing glued in was the tank to the shell. However, it's only 'spot' glued in. Using an exacto knife, I was able to cut the tank free from the shell. Everything else is held together by screws.

The construction and quality of the blaster is on the higher end of good. I would say it's on par with Nerf blasters. In fact, I would say it feels stronger and thicker than a Maverick or Nitefinder. 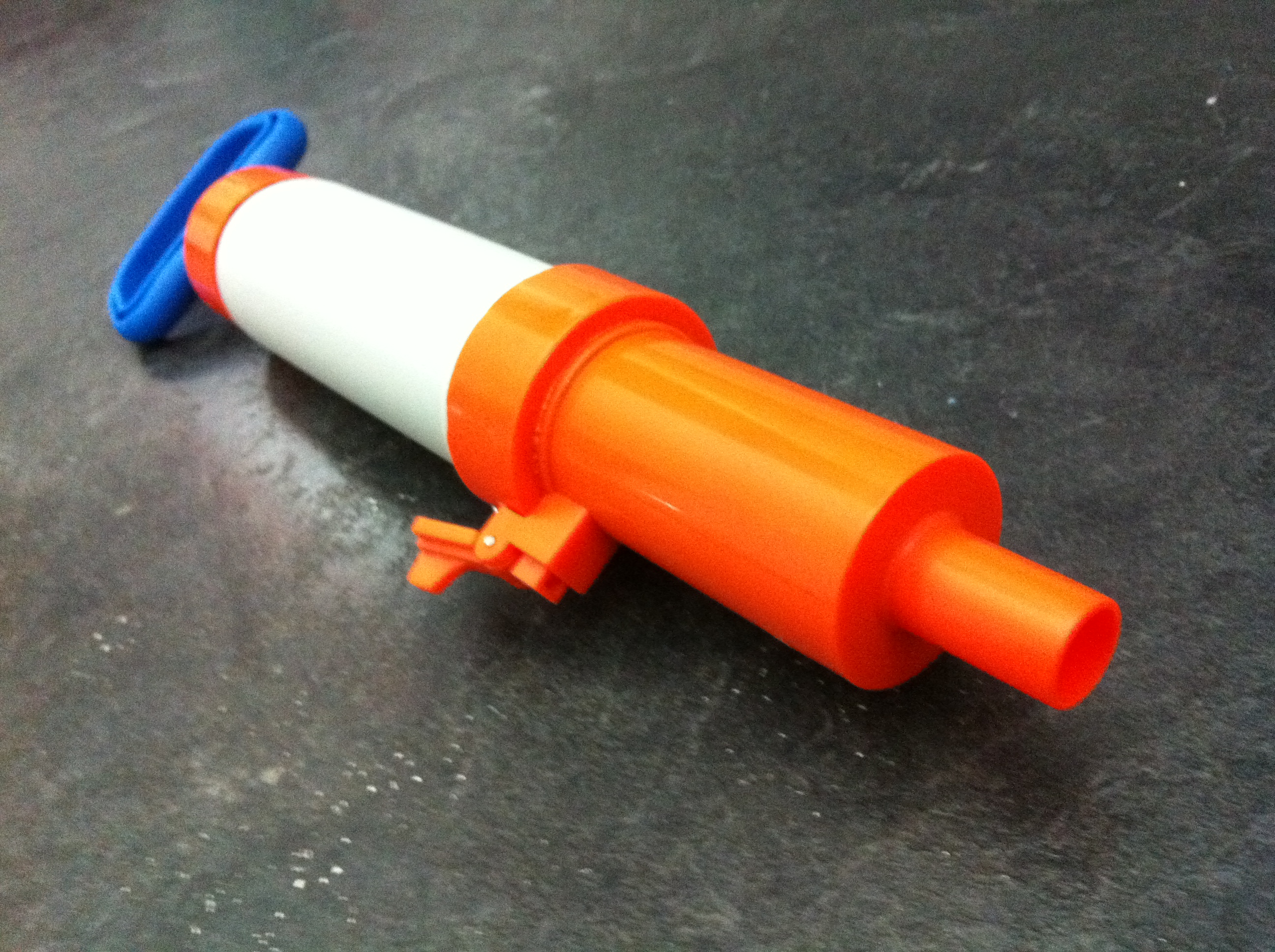 But this is the heart of the beast. The tank! It's an all in one, self contained unit. 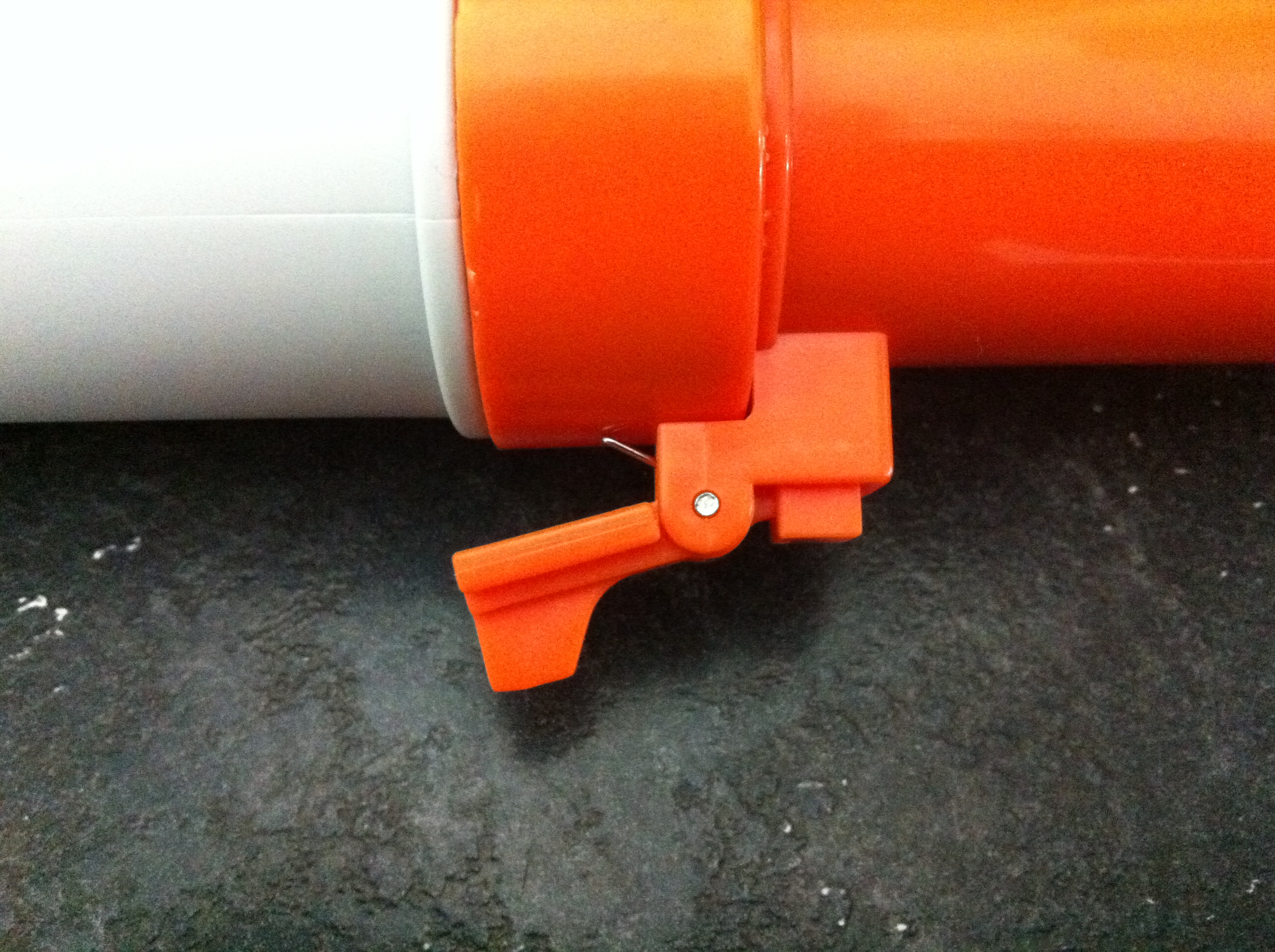 The actual pressure release valve is unlike any other that I've personally encountered. It's not a back pressure or 'pin' type release. It's actually a Snap/close pin trigger type system. 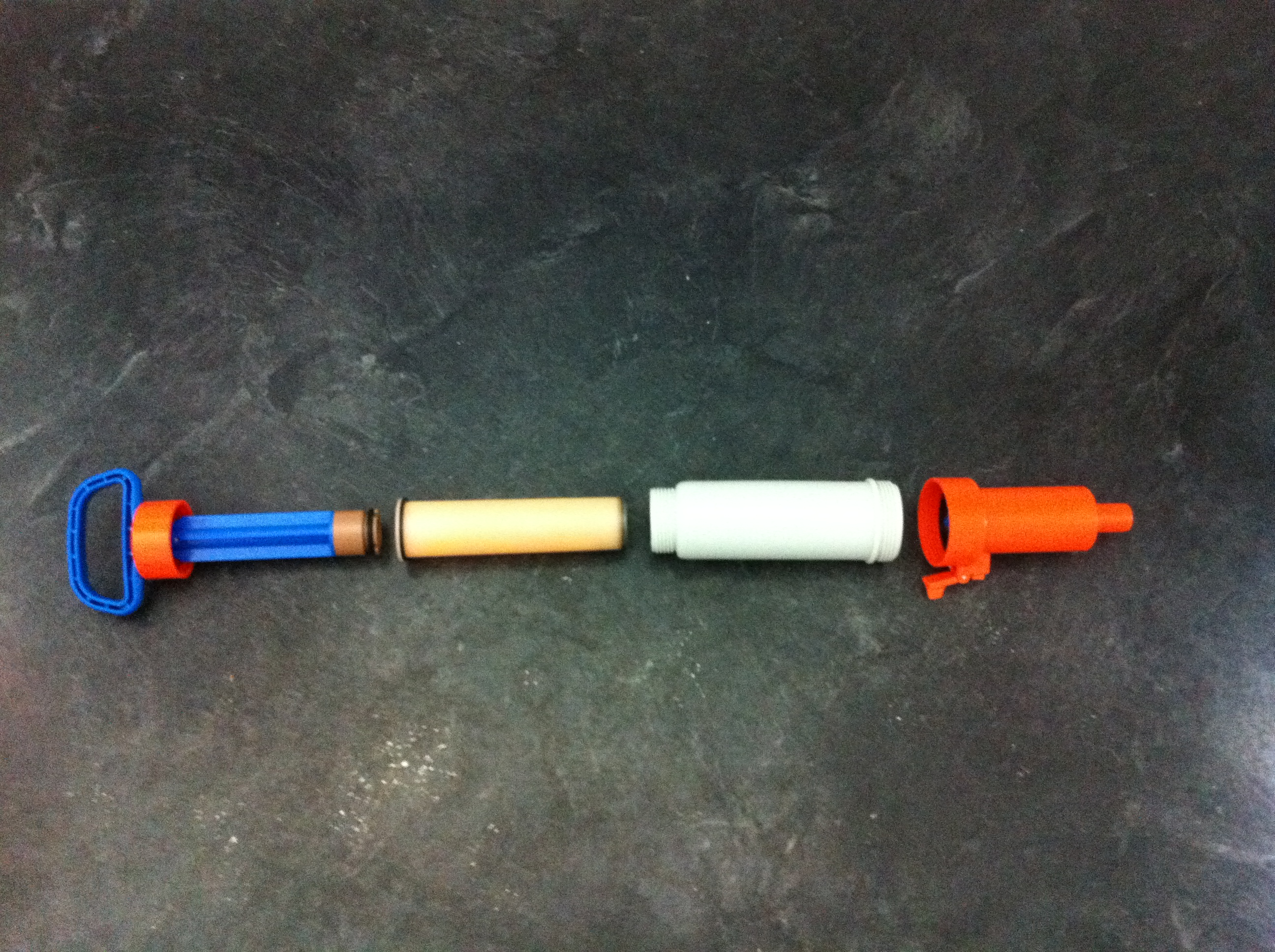 This is what I REALLY like about this blaster. The entire blaster can be taken apart 'non-destructively'. The tank actually 'unscrews' apart. 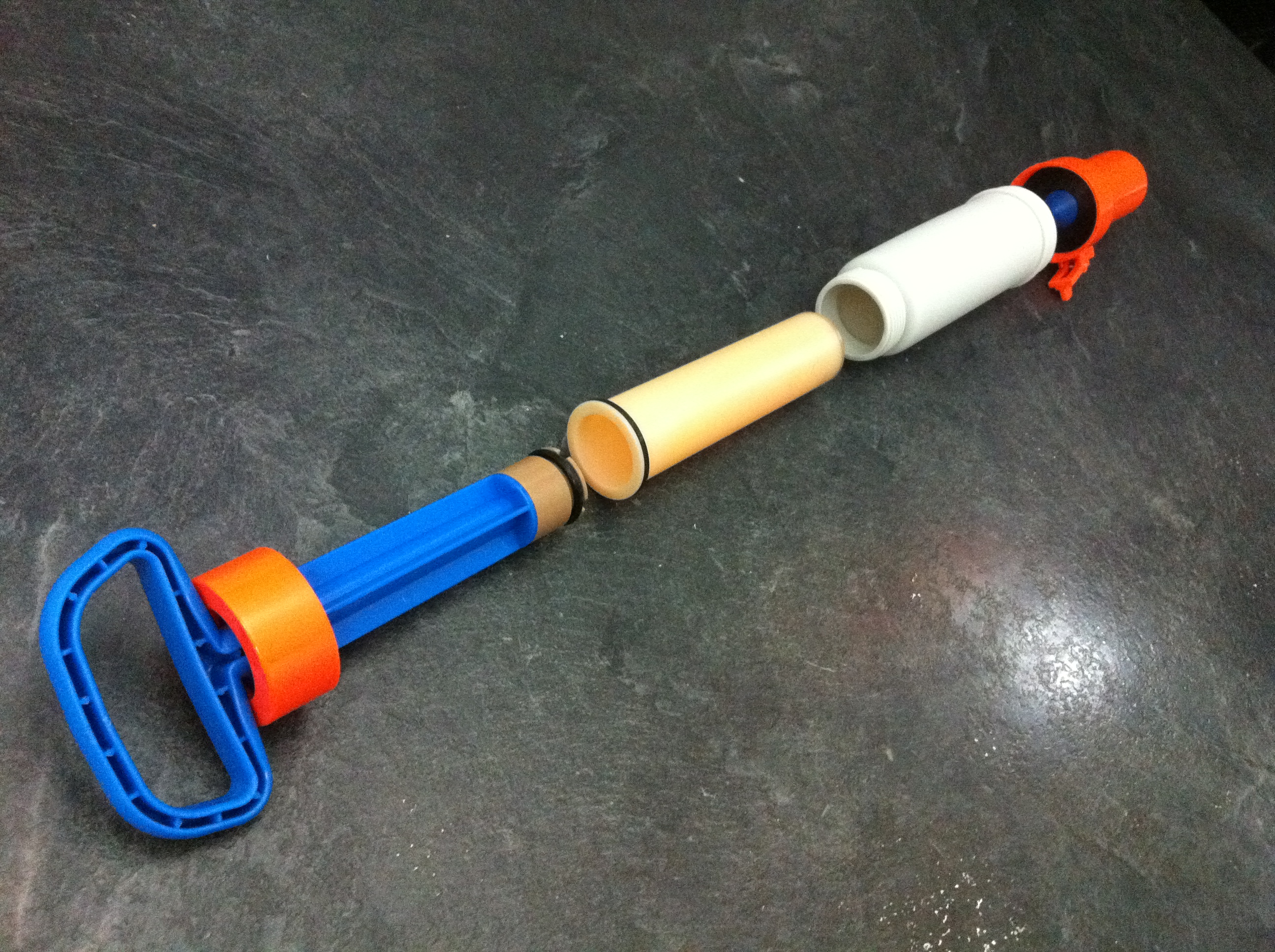 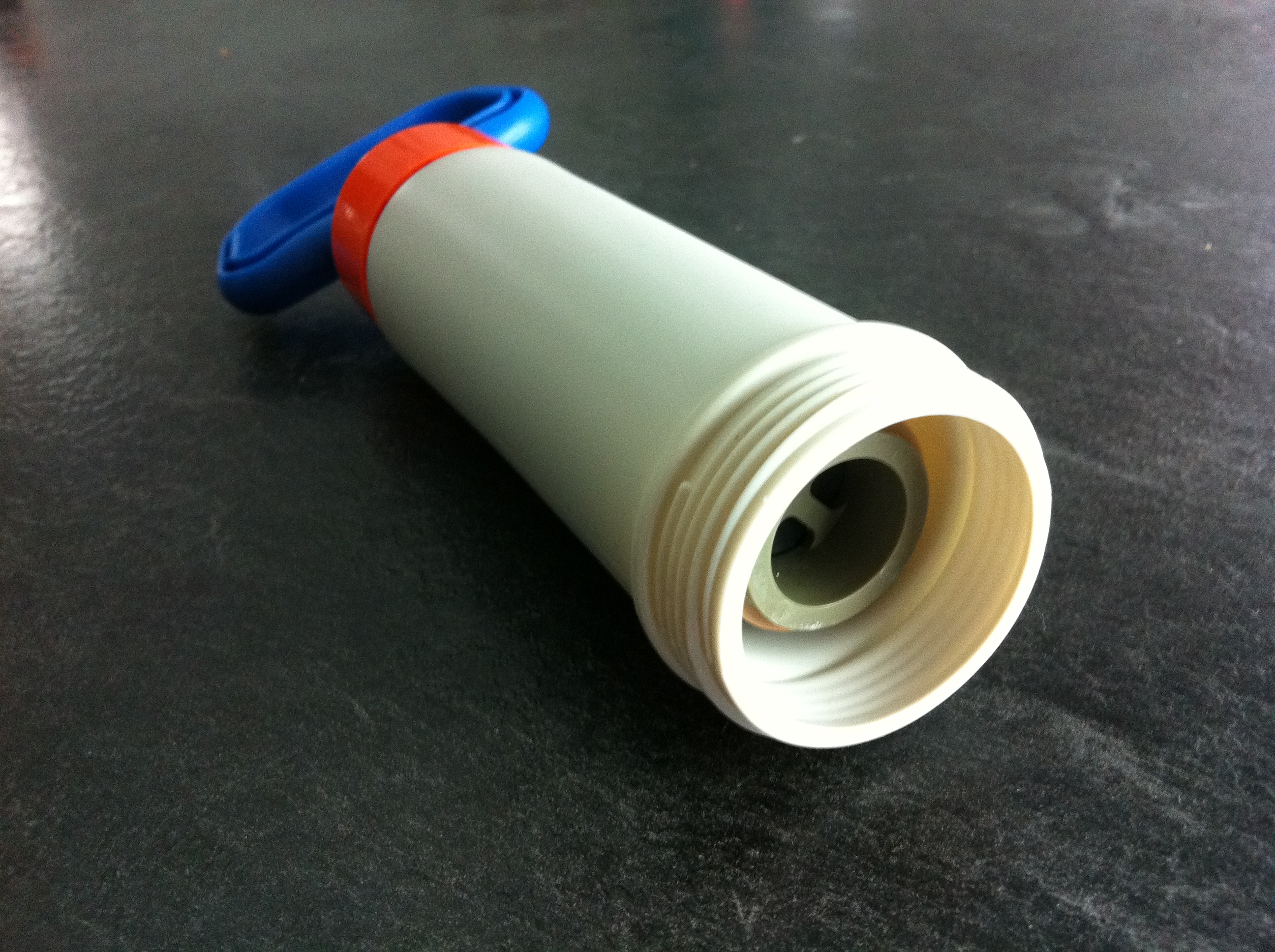 As you can see, the pump and pump tube nest inside the pressure chamber. As you pump, the air pressurizes in the space around the pump tube. I would estimate that the volume of air is comparable to an AT2k. 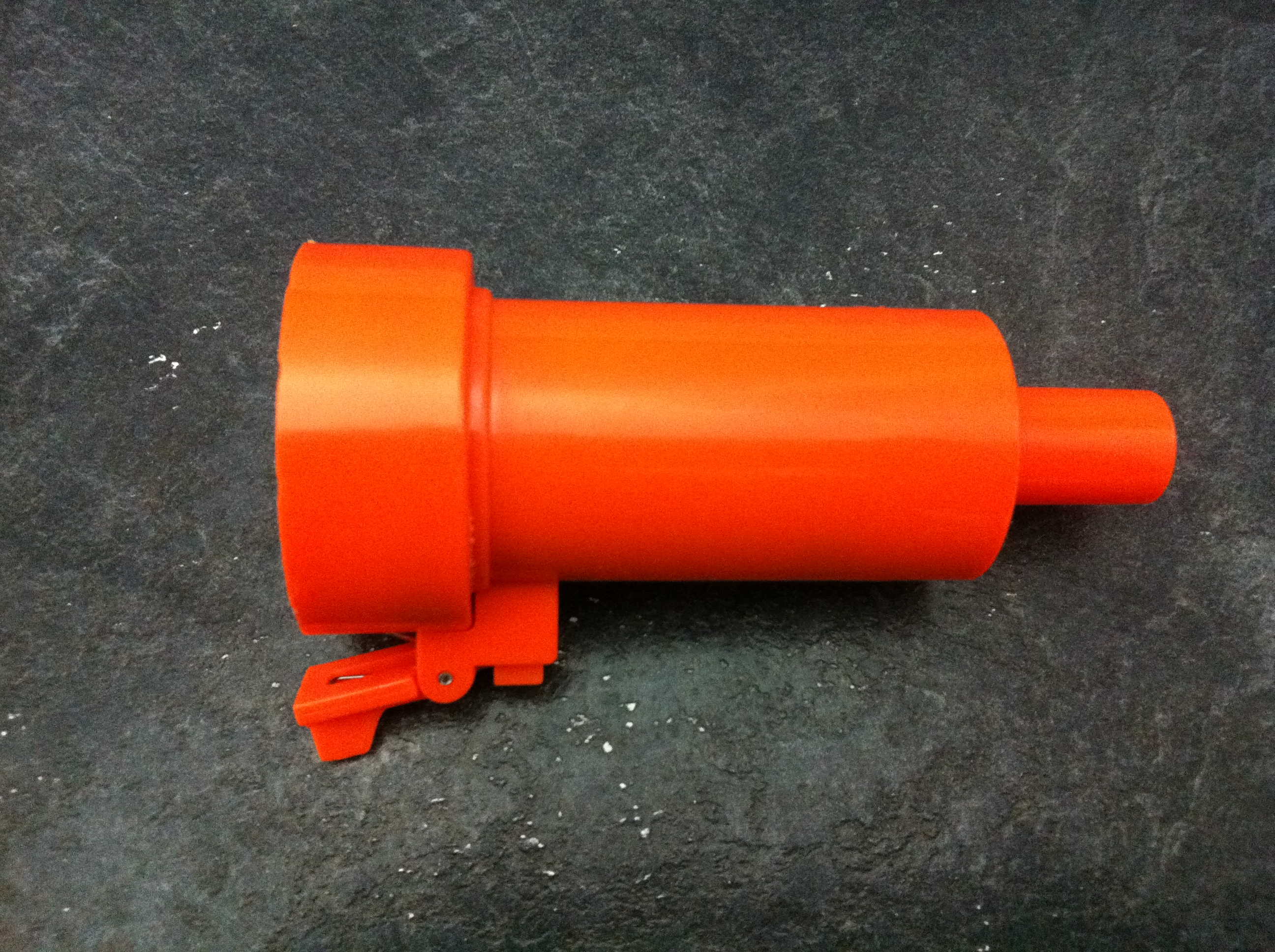 The orange part (above) houses the dump valve. It does not in any way contain the pressurized air. 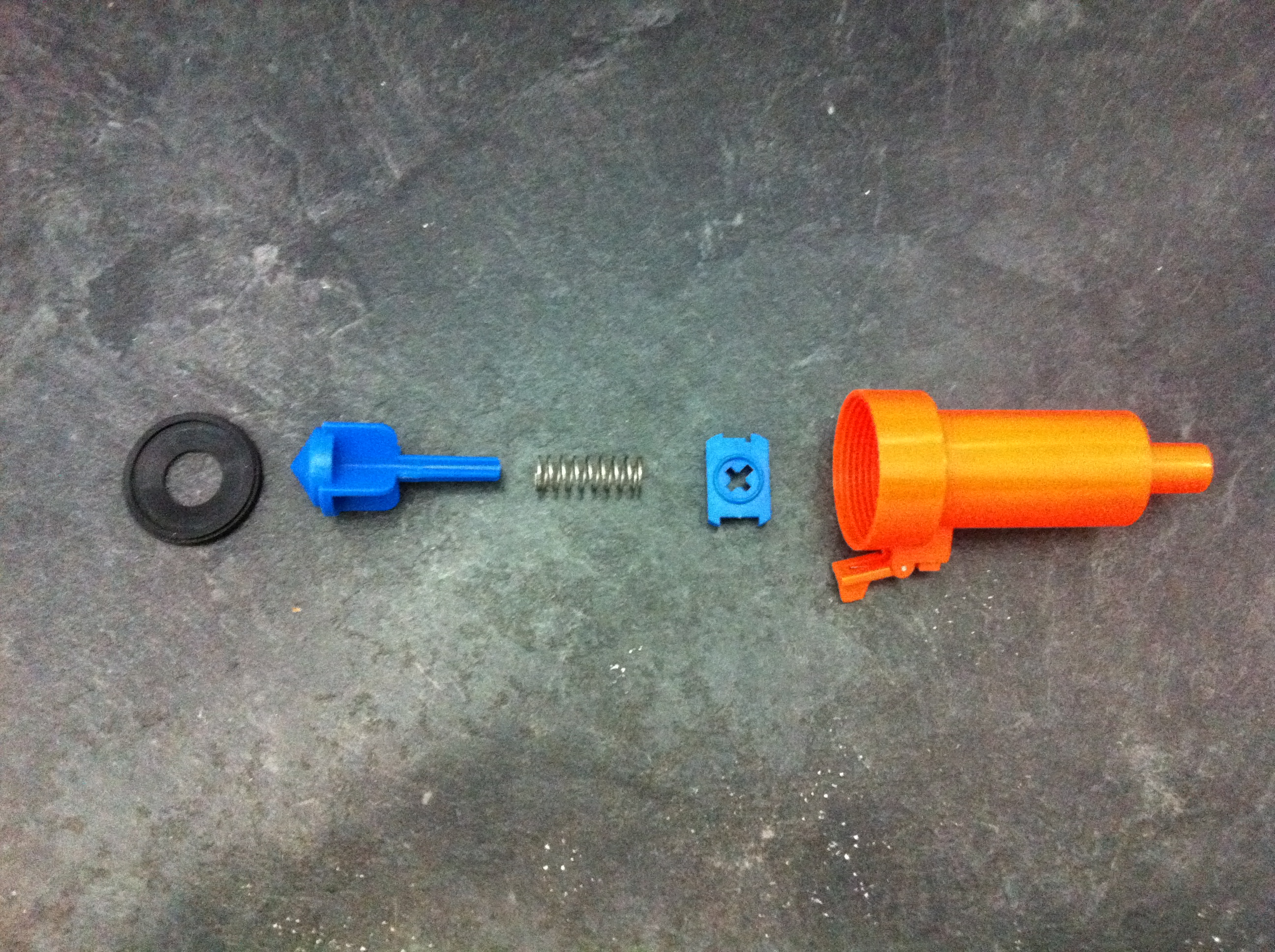 This system, although interesting and unique, is not the most efficient of the air release type systems we are all use to. The orange dump chamber is actually a lot of dead space. That being said, the air release is VERY quick. Technically, the higher the pressure, the quicker the air release.

To put it in perspective, in it's stock form, it is capable of launching the yellow foam projectiles up to 30 feet (10 meters). Pretty impressive, considering.

To sum it up, this blaster is a WIN. Design and construction are very good. It also has so much potential! Every time I do something to this thing, I find something new that makes me want to do more.

If you can find one, I definitely recommend it.

very good review, you also showed EXACTLY how it works, I am surprised you didn't draw a diagram.
makeitgo

abowden wrote:I am surprised you didn't draw a diagram.

Did you get this from TB or...?
Bacara

What's the build quality on those things like? From the photos, the plastic looks very much like that of buzzbee blasters, kinda flimsy and of a lesser grade to nerf brand plastics.

And as false implied, where from and how much?
JacobYeah

You can buy them from TaoBao


I believe he got his from psyk tho
littlebro05

Has anyone noticed that the trigger piece looks exactly like the trigger from the maverick. Well... I think it is anyway.
makeitgo

littlebro05 wrote:Has anyone noticed that the trigger piece looks exactly like the trigger from the maverick. Well... I think it is anyway.

...funny you should say that, lilbro. I thought the same thing. I was gonna mention this in the official write up but here's a taste of one of the little things I discovered.