So I've noticed that while we have a bunch of really good mod guides on here, we're fairly lacking in the very basic 'first timer' style mods. Sure they're posted in 48 different locations all over the net and I'm sure you could find 47 of those through Google, but I'm going to post a few simple ones here over the next few weeks just to make life easier for our new comers. All of my walk throughs will also make it onto my blog (Foam Dart Goodness) eventually so please check it out too. Hope you enjoy!

Nerf's NiteFinder; the first blaster for many enthusiasts and probably the simplest to modify. It comes apart relatively easily with only a handful of screws, there are no complicated parts that you have to line up, and it's a direct plunger system so spring replacements are far easier. If you're looking for somewhere to start modifying blasters, look no further than the NiteFinder.

Hell, if you're just looking for a blaster to start playing with in general, get yourself a NiteFinder. They're cheap, simple and awesome. I'll regularly run with just a sprung AR'd NiteFinder in a bunch of games, just because they're fun. You'll get better ranges than anything reverse plunger based, so just run around taking pot shots at people.

Today we're going to tackle two simple mods; an air restrictor removal and a seal improvement. The tools/consumables I used for this were...

First up we have a NiteFinder.Unscrew the bolt at the bottom holding the battery catch on. 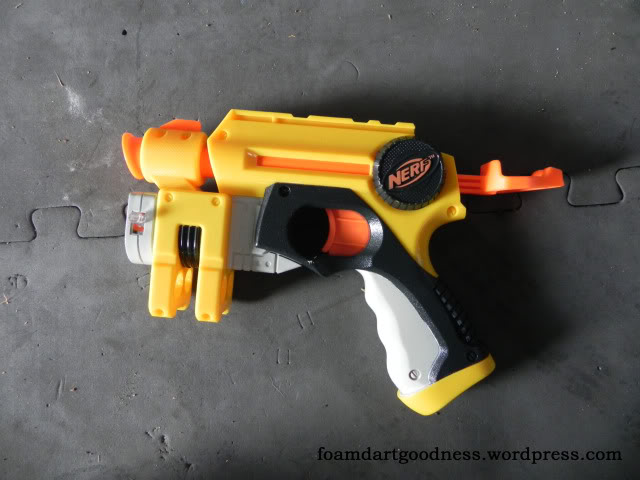 Then there should be 14 screws holding the shell together. These screws are all the same so you don't have to worry about mixing them up later, just put them all in a container.

As always, take a moment here to familarise yourself with the workings of the blaster.

Unscrew the two screws circled here to allow you to remove the plunger and tube.

Oooo look, an AR... Grab your drill and go to town.

Then grab your file and clean up the remaining dags. You want the inside of the small front tube to be as smooth as possible.

The O-ring here is what presses up against the side of the plunger tube and forces the air towards the dart. Unfortunately this doesn't have a perfect seal from the factory so we need to push the O-ring out a little bit.

Start by removing the O-ring. Easiest and safest way I've found is to use a very small flat head screwdriver to pry the O-ring over the front lip. Be careful not to pull it too hard through as they do snap.

Grab some Teflon tape. Electrical tape does also work, but because it's thicker you can't be quite as precise. By all means, if it's all you've got access to, electrical tape is far better than nothing, but splurge the few dollars for a roll of Teflon tape and you'll be much better off (and one roll should last you about a billion blasters).

Wrap said tape around the plunger head a few times and then put the O-ring back on. This is very much a trial and error process to figure out how much tape you'll need. Keep playing with it until you have a good seal between the plunger head and tube. How I'll normally check is to hold the head inside the tube and then blow down the barrel; if you can blow through it, either you've got a leak somewhere or the seal isn't good enough. However, also make sure that you don't have too much tape on. The head should be able to slide freely throughout the tube with practically no resistance. Again, trial and error.

Once that's all good, start putting it all back together! Place the catch, plunger tube and rod all back in the shell and screw the two locator screws back in place.

Put the other half of the shell back on and screw it back together.

Put the battery catch back on and we're done!

With stock whistlers darts from the stock blaster, I was getting an average of 13m

With the same darts from the modifed blaster, I was getting an average of 17m
mavshot

what would be a good easily accessible spring to help mod this little beast? I might pick one up tomorrow and have some fun with it. Can i get a spring at bunnings for it perhaps???
Dietzie

Trying to bring organized wars to the Fraser Coast

Thanks. Will go past bunnings on the way home if i can get what i want from kmart. Means I can use the extra stampede / NF spring i ordered from OMW for another stampede build.
lech 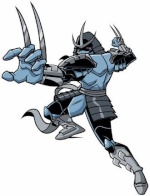 Dietzie wrote:The C836 spring (Bunnings) is the usual mod spring. Needs two coils cut off so the the trigger will catch but makes for some good ranges

The full spring can be used, although its a little difficult to assemble the gun if you haven't done a draw extension, it is possible with some precompression of the spring.
WH1PLA5H

Well my local bunnings didn't have the spring required. They don't carry them at all but can get them in at special request... oh crap. Ohwell. Picked up a NF for $8 from Kmart and brought another Stampede and laybuyed another for $39 each!!! BARGAIN. Shhhh. dont tell the Mrs! Going to perform a SMG type conversion one of the new ones