So I'm assuming this come from the fact that the US is the main stay for blasters, but why do Australians measure blaster ranges in feet? Off the top of my head, I can look and say somethign to the effect of 'that tree is about 10m away', but I'll be buggered if I know how many feet it is (beyond doing a quick mental sum in my head of 3ft roughly = 1m, so it's ~30ft).

We're Australian. We use the metric system. It's better.

If you speak in feet, why?
Sairex

Yeh, with Sairex, the bigger numbers are more impressive. Admittedly, I still use imperial a fair bit in everyday life. 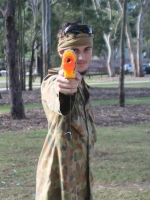 I tend to find it easier to roughly gauge distances in the imperial system, and as stated above, bigger numbers sound cooler.
That, and I know that the soles of my shoes are almost exactly twelve inches, so that makes it easy for me to measure ranges when testing my blasters.
Jeo

@guys who use imperial...
Do you use it for anything else?
How old are you?
Do you spell things with z's instead of s's?


Back on the discussion though...
Sure 100ft has three numbers in it, but do you objectively know what 100ft is off the top of you head? I know I have to convert it back to ~30m before it instinctively makes sense. Or do you know what x'ft are based off the fact that you've measured multiple blasters and now know?

I know that I tend to generally go out of my way to 'correct' people when it comes to the use of the American language as opposed to English, so presumably that's a part of my instance on metric numbers in my posts. At the same time however, I do genuinely dislike imperial numbering. 36 inches to a yard; how does that help anyone?
I remember having to stop repeatedly and think about brass sizing when building a longshot breech as 1/2", 17/32", 9/16" and 19/32" all make sense mathematically, but it takes significantly more effort than say 12mm, 13mm, 14mm and 15mm (and yes, I know those sizes aren't the same, it's just an example).
DaftYoshi

Jeo wrote:@guys who use imperial...
Do you use it for anything else?
How old are you?
Do you spell things with z's instead of s's?

I just tend to use feet and inches if I'm working with rough numbers, sort of a "yay much" Thing, but I use metric for everything else. I also have a background in aviation, where elevations are all in feet.
I'm twenty one, but I've grown up working with my dad, who constantly switches between metric and imperial.

As for the language, I really do hate the American-English thing. I think "Nite" would be my most hated American spelling.
But yeah, Imperial for rough guesses, metric for precision.
Servulus

Some of us might be old enough to remember the switch, others might have some US schooling or have been educated in other countries where the imperial system was used in. But really, imperial is just easier (for me).
KingCam

Jeo, I'm 32 mate, and am competent in both metric and imperial. When I'm boiler-making or doing carpentry, it's predominantly metric.

When doing diesel fitting or servicing, it's imperial (Caterpillar gear mainly - which is US made). With the majority of firearms I've used, calibre is imperial, and ranging is done in yards. Same as archery - measured in fps and ranged in yards. The cross-over from bows and rifles to Nerf is probably why I use feet, rather than metres, though I have been known to use both. Brass is obviously imperial, and so is PETG, yet conduit is metric. It's all about being flexible I guess.

A lot of the guys I've learnt from are like Serv, and even though they saw the introduction of the metric system, the majority of them still use imperial, which is probably something that's rubbed off to a degree.

For me I tend to measure Nerf *ranges* in 'feet' for a few reasons:

- It is what I most commonly see for Nerf-related ranges
- It is what is the most recognisable when talking with fellow Nerf'ers
- I can roughly pace out a shot I make and each of my footsteps (whilst wearing shoes) which *closely* equates to 1 ft measurement... without having to muck around with a measuring tape.

However, I do tend to convert feet into meters (centimeters if needed xD) when I want to be more accurate, or just get a better feel for ranges (since I grew up with Metric).

When measuring anything for *modding* however, I always try to translate from imperial to metric for measuring parts and materials(since my rulers and measuring tapes are metric only, and I find it more accurate) **UNLESS** I go to a store to find a component which is only measured in inches, without having to fiddle around with lots of fractions / decimal point numbers xD
[G]

I grew up with the metric system, from school through to my apprenticeship as an electrician, I have always worked with meters and millimeters, never centimeters since I also do a lot of drafting work.

I understand the principles of imperial measurement, the only time I ever use it is for determining the diameter of a circle if its for pipe, if its not for a standard sized pipe fitting then I'll use the metric system.

I find the metric system a lot simpler for the way its set out:

When drafting up plans, I also find the metric system a lot nicer/easier to read compared with its imperial counterpart.

Anyway those are my thoughts.
Beaver

I take all measurements in imperial units, with the sole exception of mass (my chronograph and 300ft measuring tape only have feet/fps). Whenever I'm doing calculations (such as with Doom's drag equations) I convert everything to metric. The measurement vernacular in the USA is still very solidly rooted in imperial units, moreso even than commonwealth nations.