Hey all, though I'd do an elite alpha trooper mod guide of sorts, seeing as I can't seem to find one out there yet..
Alright, Elite Alpha Trooper. general mods, Air restrictor removal, lock removal. etc. you know the drill, fairly standard mods.. just a run through. anyway, first, materials needed:
Elite alpha trooper, stock, presumably.
wire cutters, for the first part of the ar removal. (dremel can also be used.)
screwdriver, fairly standardly used, should fit most nerf blasters.
dremel, for ar'ing the blaster.

ok, on to the modding! 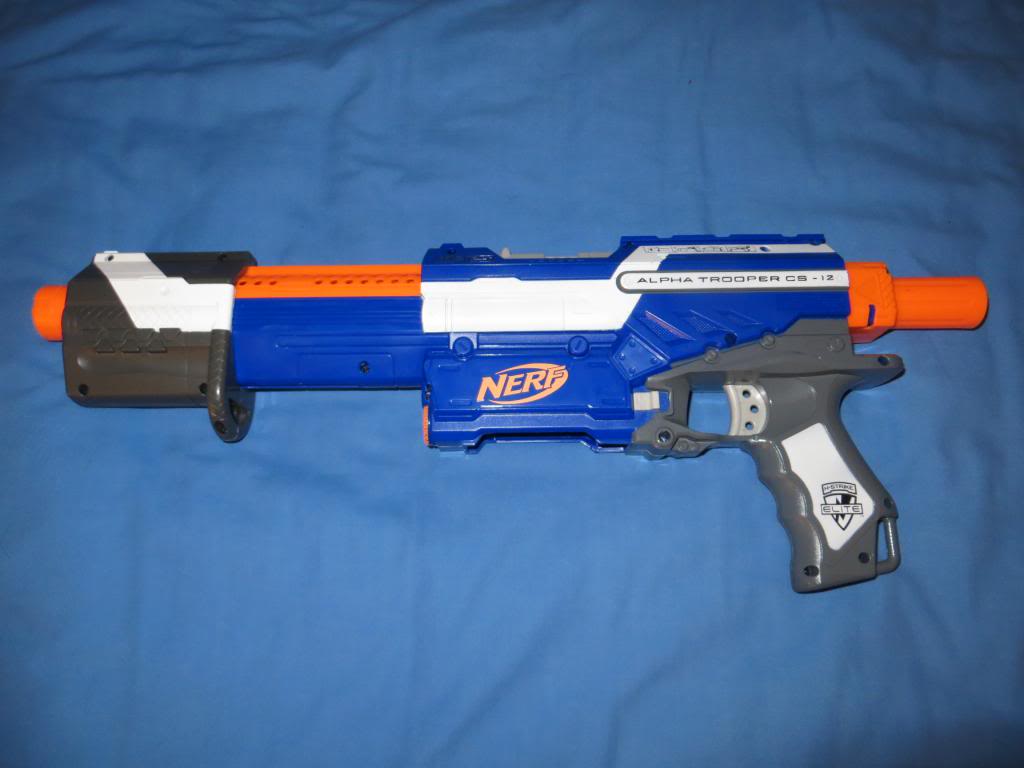 next.. remove the screws from both the stock attachment point, and the priming handle, and set these aside, personally i like to leave the screws in these parts as they are not needed until we're putting the blaster back together. 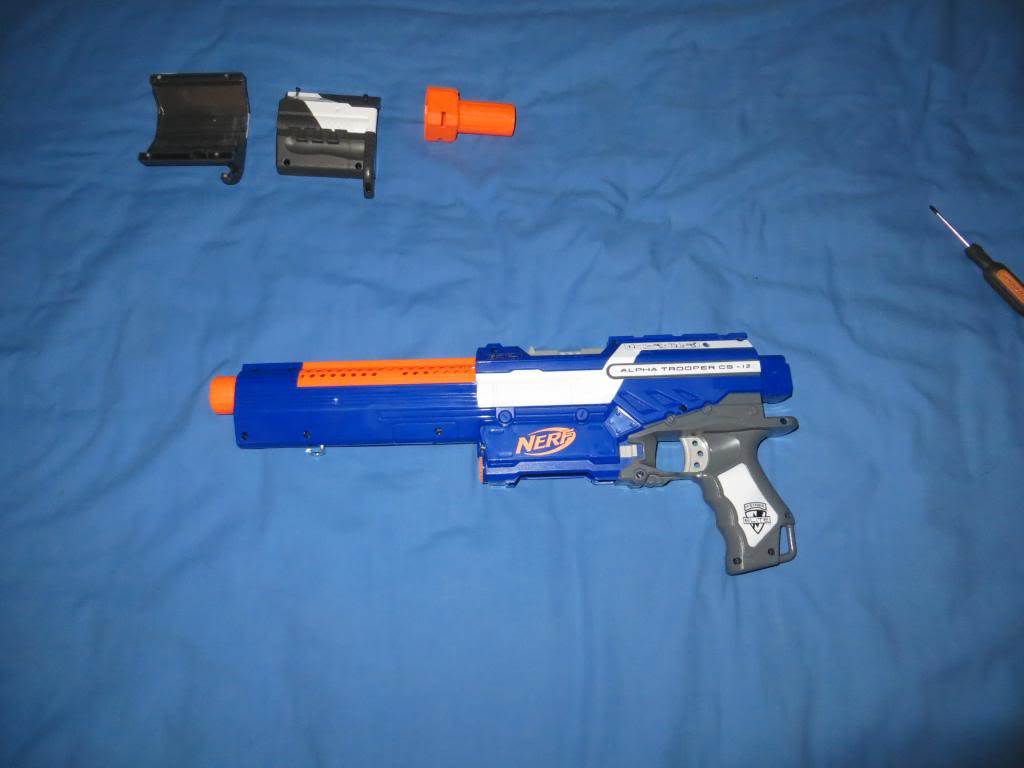 next, remove all screws, and place them aside, personally i tend to place them in a little imaginary form of the blaster, where the screw ports would be on it.. 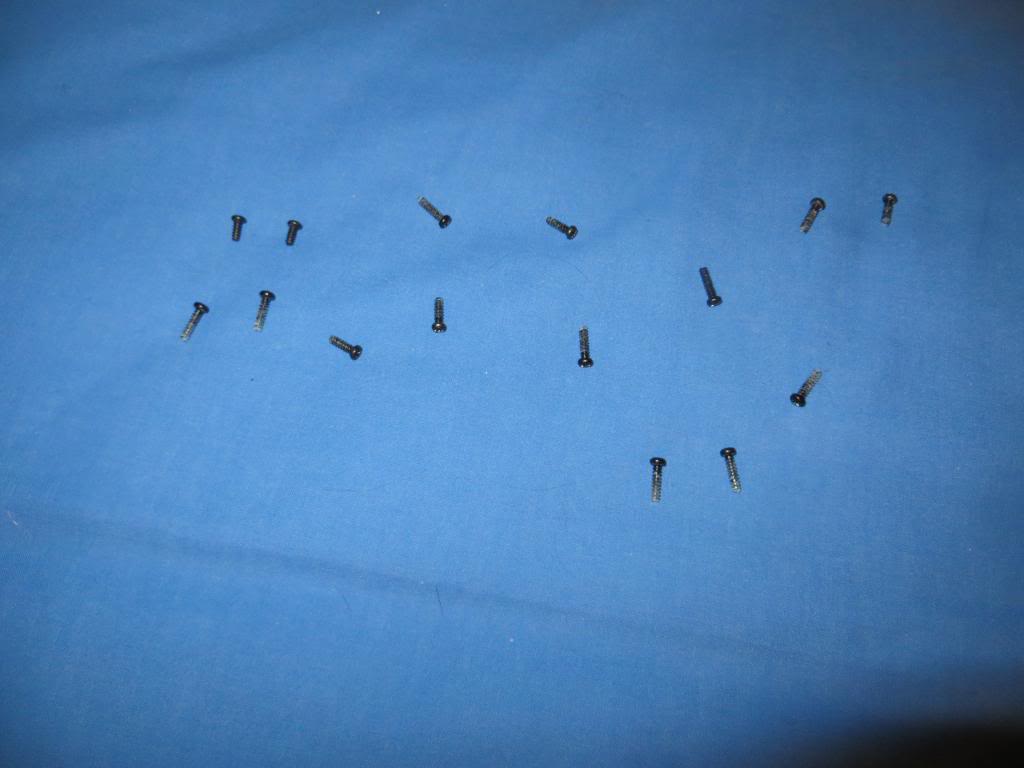 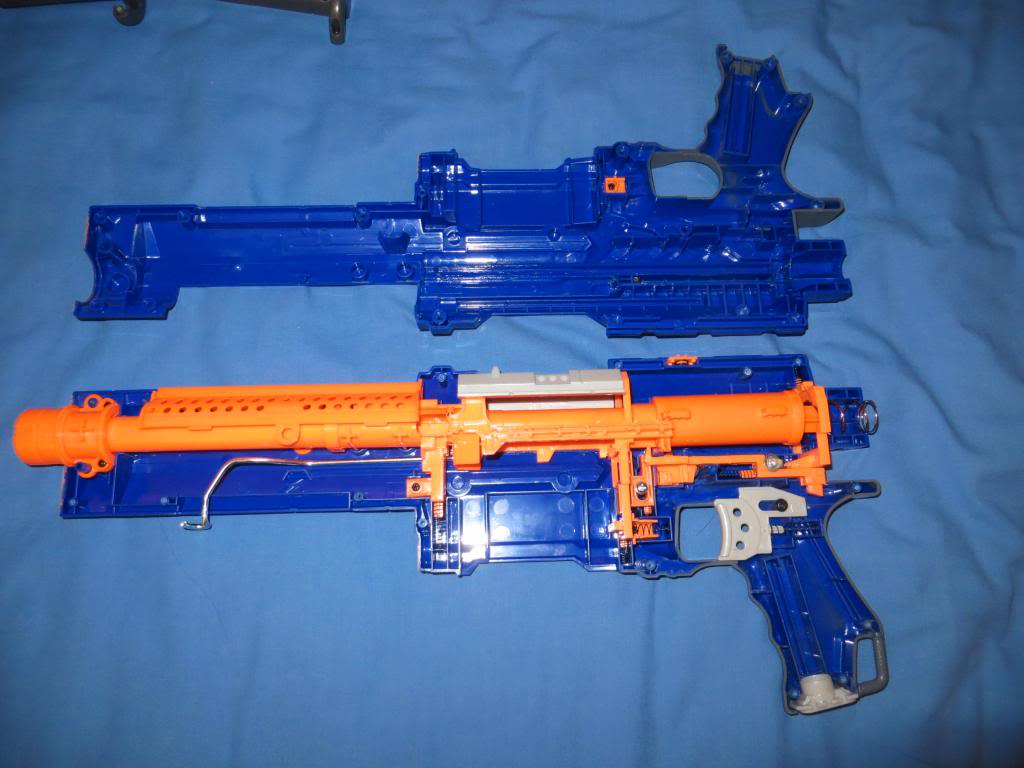 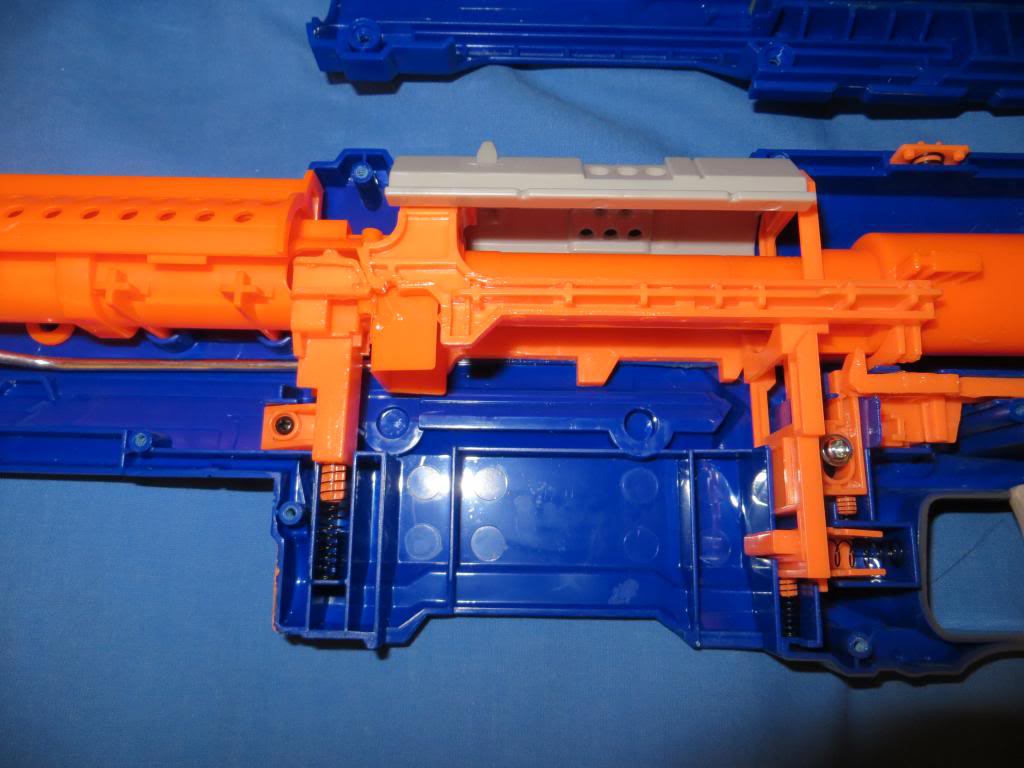 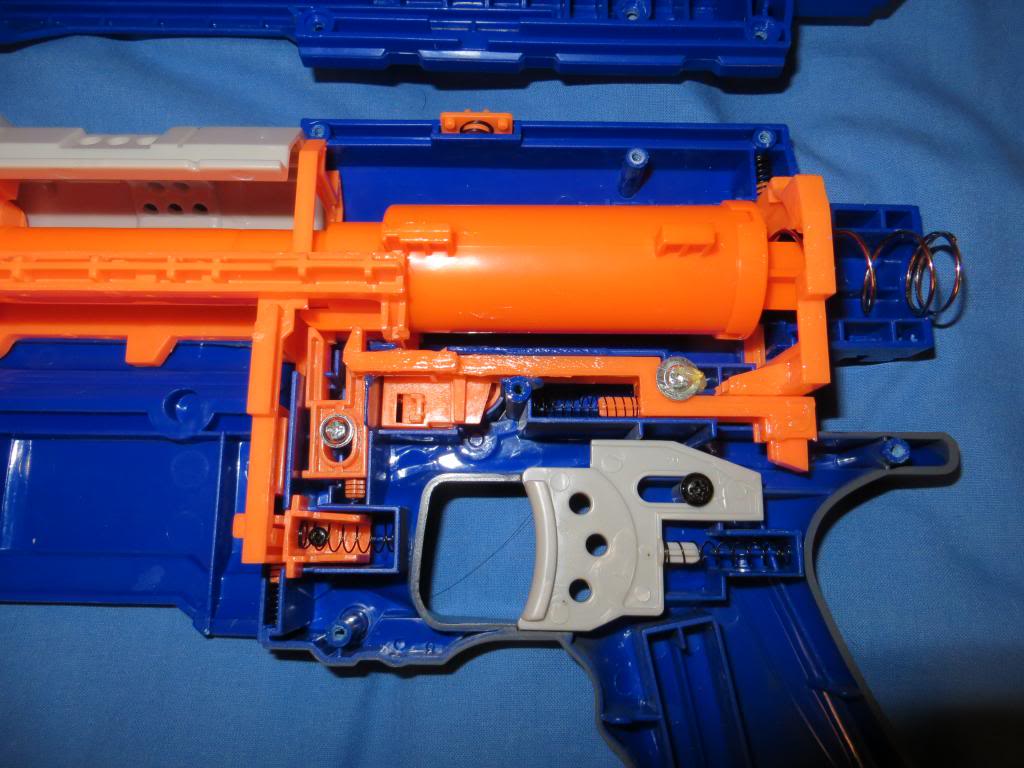 alright, next, as we can see, full of junk, but although there are more locks to remove, I only removed the one, and this is the one which stops us from removing the clip when the priming handle is pushed forwards. 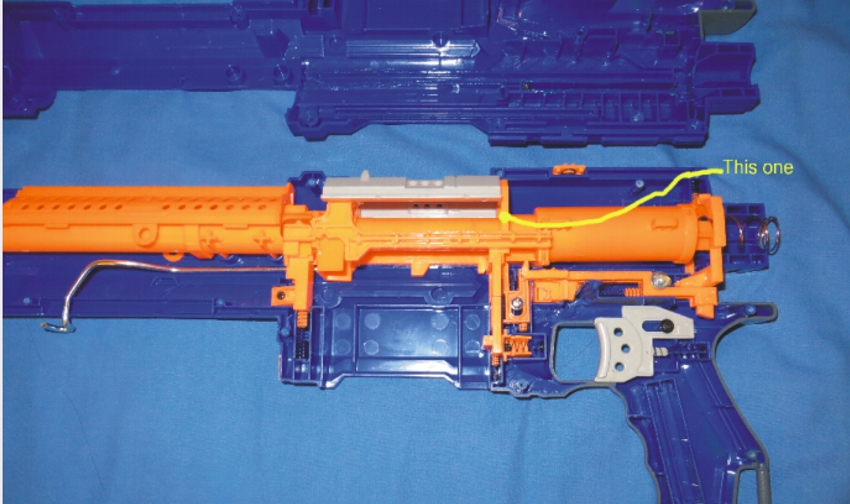 alright, what's quite interesting about this blaster is the way in which the priming lock works, when you prime the blaster, and return the priming handle forwards, there is a lock, just below the bolt sled which locks it in place, and when the blaster is fired, it moves the whole of the plunger tube forwards, disabling the lock.. here's what i mean... 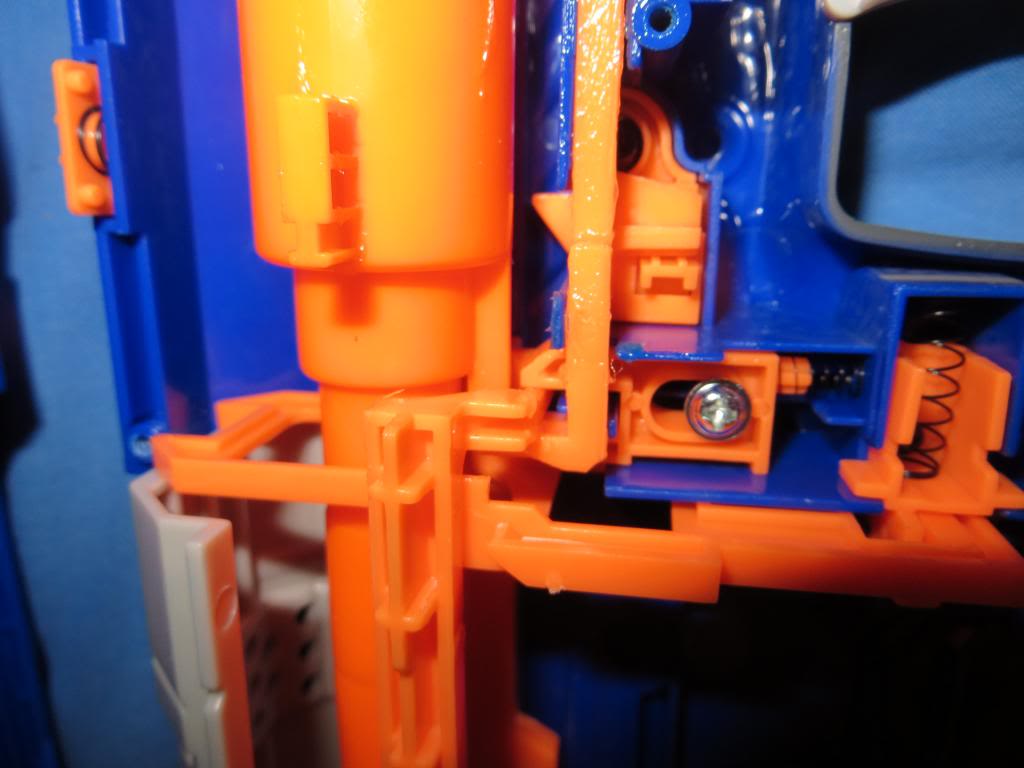 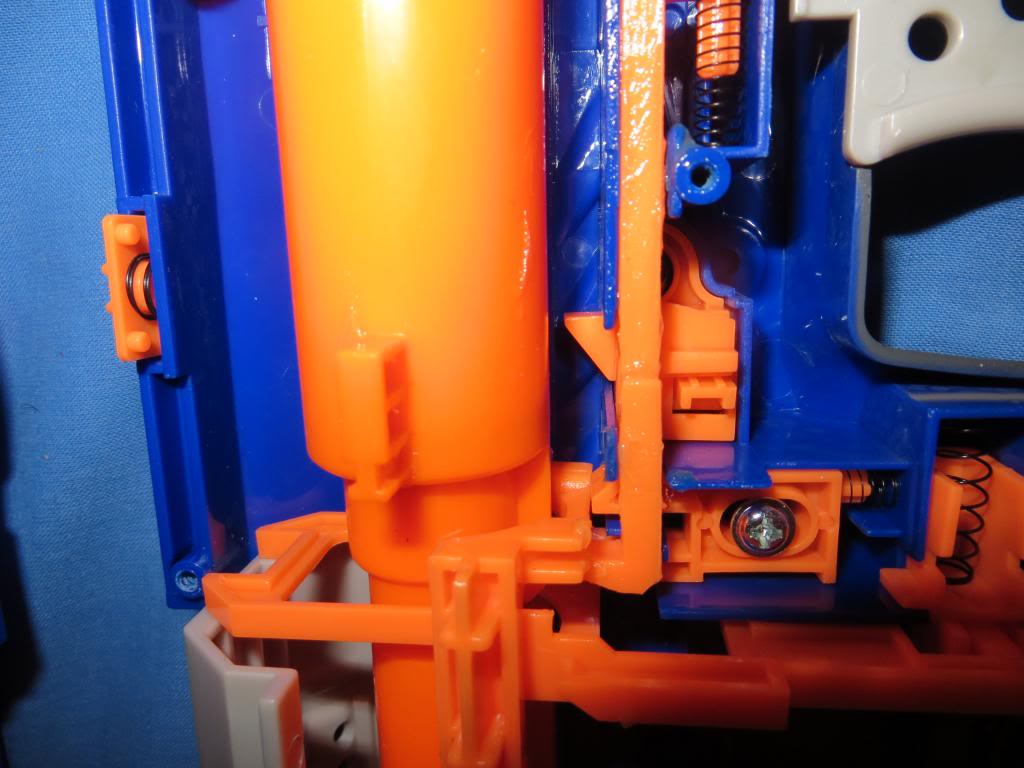 anyway, I chose to leave this lock in, because it means that you can fire it without making sure that the priming handle is all the way forwards, and it means that I can fire it one handed, I wouldn't be able to if I removed that particular lock.

next, the Air Restrictor.. 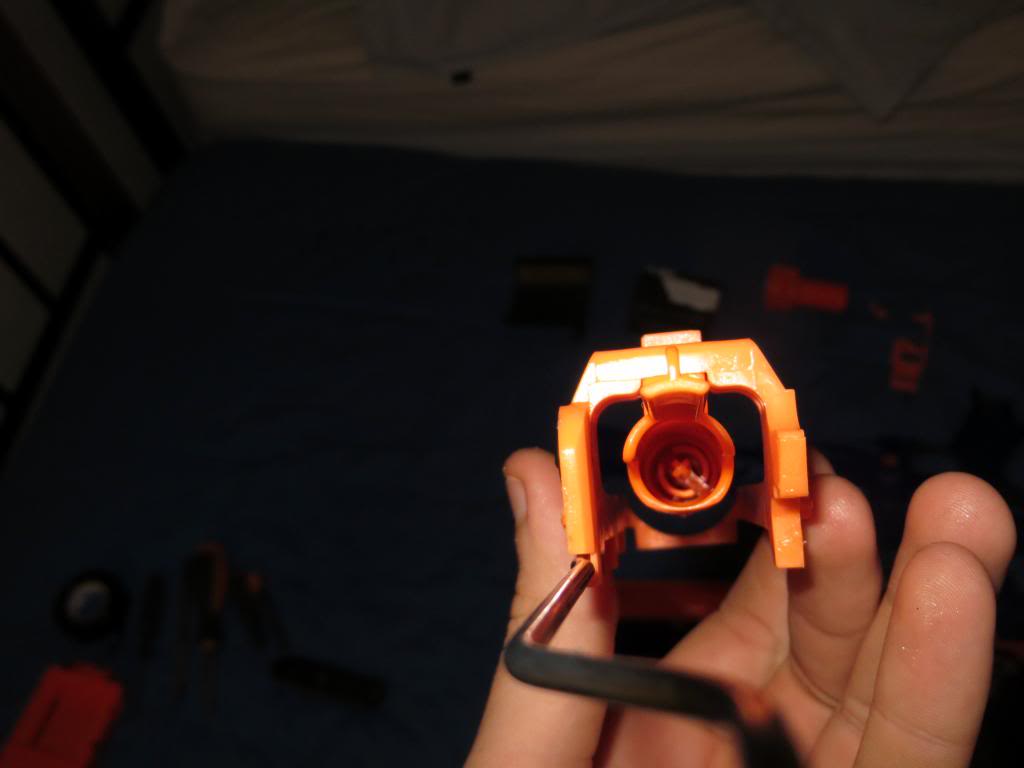 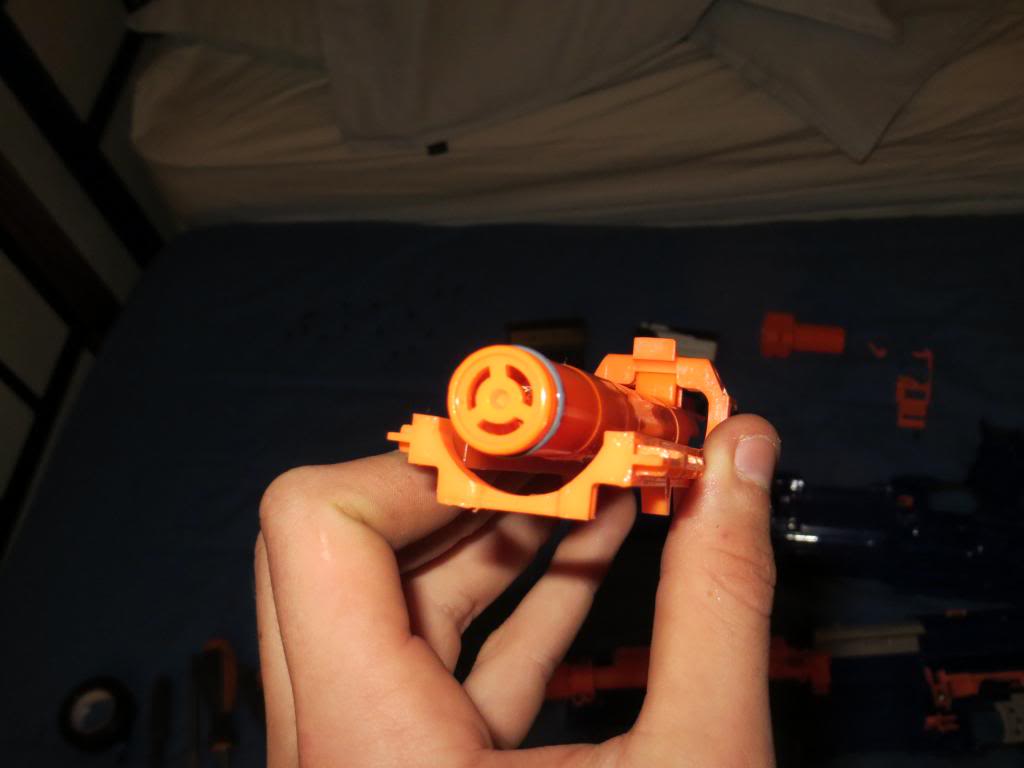 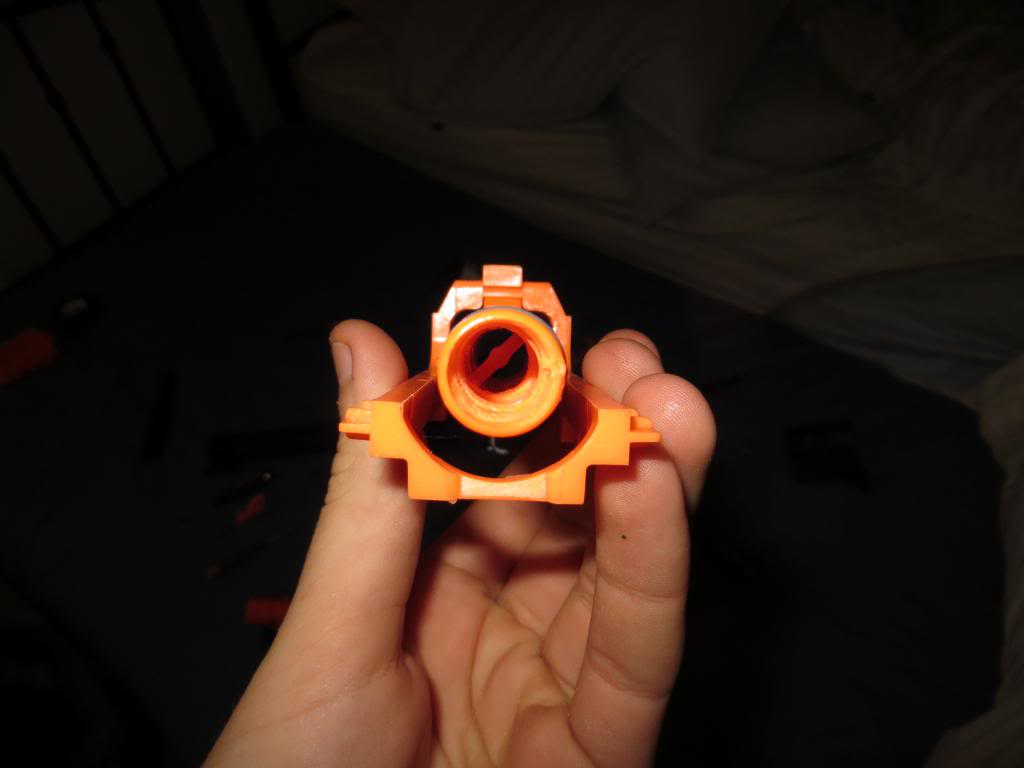 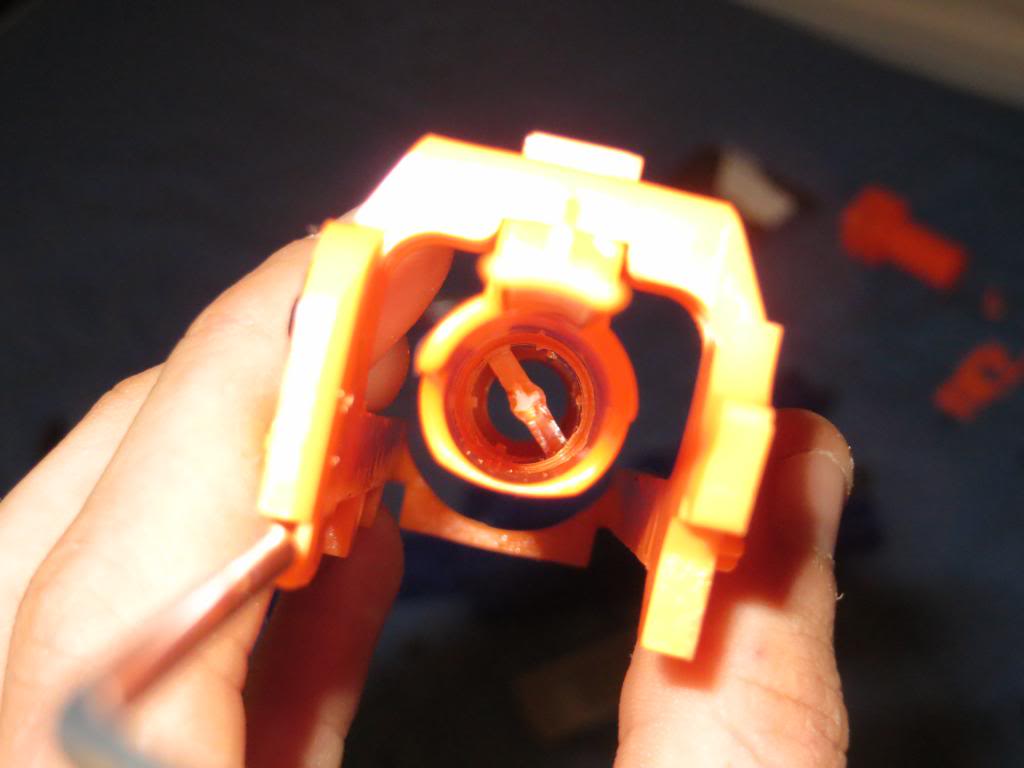 Note, when re-assembling the blaster, and putting the plunger tube back in, make sure that the little ramp on the end is facing down, towards the unique lock i was speaking of earlier.
alright, re-assemble the blaster once everything is back in, and you're done, as you're doing so, make sure to make sure the blaster functions smoothly, all the way until you put the last screw in.

note: there was no spring replacement/addition to the EAT, and therefore this testing is just with no AR's in the blaster, there is a slight increase in ranges, and should be quite a formidable blaster with a better spring.

(modifying your blaster could be the best thing you've done to blaster, but please note, modifying your blaster can cause your blaster to break, faster than it would normally. hopefully it doesn't, but in any case, I hope you found this guide helpful, and not too much a waste of your time.)
that concludes my First mod guide, and a very brief mod guide for the Elite Alpha Trooper.

Great work for a first go man. A lot better than some of the supposed 'pro' modders out there.
Johnnus

thanks guys, just thought i'd get one out there, should be a few more soon, hopefully.
oznerfnerd

ashrob wrote:thanks guys, just thought i'd get one out there, should be a few more soon, hopefully.

That's a decent write up, and you did a good job on that mod.

Throw a spring in that and it'll be a nail gun.

The AT was always awesome, and the Elite version is even better.

You can just buy one and drill out the AR, and even then it's really good.
Sponsored content