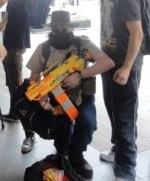 Just a quick review based on my experiences with the stampede. I havn't modded it for fear of damaging it yet but will update once modded.

I picked mine up during the target toy sale this year and I am impressed.
It feels quite heavy with the 6 (Six) d cell batteries. I would recomend buying rechargeables or a different as buying a $50 (Now around $100) nerf gun then needing another $15 or so for batteries is a bit extreme.

Now onto the actual gun.
As I said it's quite heavy with batteries and the center of gravity is well behind the trigger. Generously, the stampede is supplied with 3 eighteen dart clips and a six clip with enough darts to fill them. The rate of fire is quite fearsome, which makes up or its not so great accuracy in my opinion. The gun is accurate stock to around 6 metres with streamlines with a range of about 10 metres.

Supplied with 6 tactical rails nerf didn't skimp on the number of places to place your tacticool equipment. Supplied with a riot shield that is both flimsey and usless the other attachment serves a better purpose. The foregrip/bipod is well made and sturdy(ish). The bipod stays in place on the rail well enough, just don't hold it only by the grip. It's easy to deploy and retract but it's up to you whether you want to use it or not.

To sum up, the stampede is a great nerf gun. It may be expensive and heavy but its coolness factor, the 3 eighteen clips and the ability to be modded into a monster makes it a great blaster to complement any nerfer's armoury.
littlebro05

Even though most people know what a stampede looks like, a review isn't complete without a picture from google =).

That's why you mod it with airsoft batteries or trustfires with spring upgrade and voltage mods and BAM 30metres angled.
That Guy