Hey all, Sadavi5 here with something beautiful: A Proton. The Target near my college sort of... "Jumped the Gun" on releasing these things, and my friend decided to ensure that his birthday present next year will be very special by getting it for me. He also has the Vigilon, which he has graciously lent me in order to review it for you all. 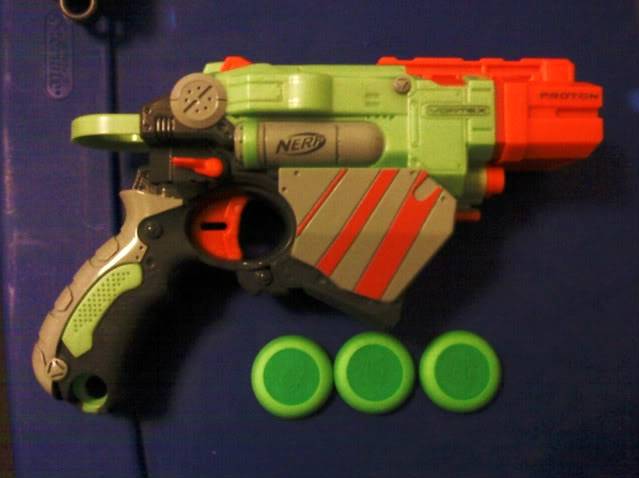 Features:
- Loads via “Snap-Load” Sled; pull it out, place the disk, and hit one of the return levers located on either side of the gun.
- Multiple safety stages; cannot dry-fire, cannot pull trigger without cocking or while cocking.
- Carry-Loop in Handle.
- 1 Tactical Rail on top compatible with all N-Strike and Vortex accessories except Stampede Shield.
- Anti-Jam Button; press, hold, and tip forward to release jammed disks.

Notes: A gun roughly the size and use of the Nitefinder, this gun is a fantastic lowest tier. Its range mirrors that of the doubly-expensive Vigilon, and it looks fantastic- other than a few paint blotches and bleeds. And that unavoidable dumb loop on the back which, unfortunately, you really do need in order to cock the thing. Despite an anti-jam button it’s yet to jam up on me. At point blank, unmodified, it will bruise some thin-skinned people. Plus, the snap-load sled action is a great feature. The only big downside is the lack of places to put more disks, but Drac remedied this already with his Gravity Magazine Attachment. Some quick internal mods, found online, can easily kick the ranges up into the high eighties. Overall, a great buy for the price, and a great start to the Vortex line.