This will be a look at the internals of my longshot and will show you guys how to make a clip accepting breech with an (Australian)pvc barrel. I'll also show you how I reinforced and weighted my longshot stock using a silicon/cornflour putty. 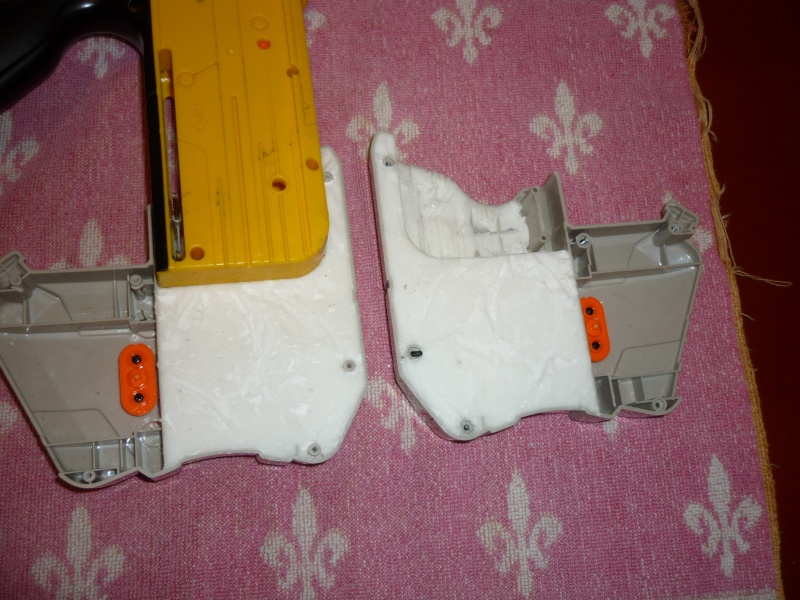 I've filled in both sides of the shell with a mix of silicone and cornflour. This makes the stock rigid and adds weight. The putty was molded to the shape of the longshot rear, meaning it has a perfect fit. Also, while the putty was still 'wet', i screwed the halves together on the back of the longshot with a piece of baking paper between the halves. This creates a perfect fit for the rear for the blaster and the halves as the screw together.
To make the putty is fairly simple. Get a mixing bowl, sprinkle with cornflour and empty most of a tube of silicone sealant into it. Then, add cornflour and mix. Continue to add cornflour until it goes white, moldable and still sticks to your fingers. Spray the things you DON'T want it to stick to with silicon spray (like the back of the longshot shell). Also, when you put the halves together once dry, add a light layer of cornflour to stop it sticking. 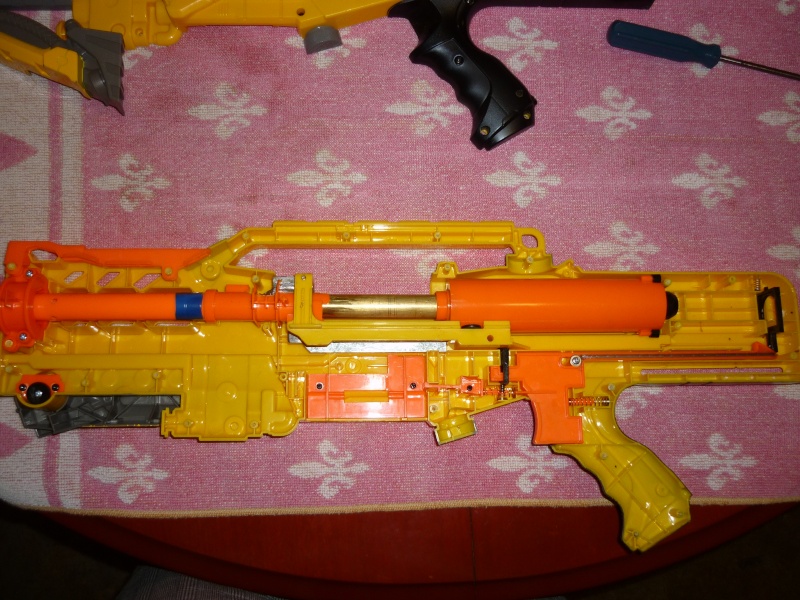 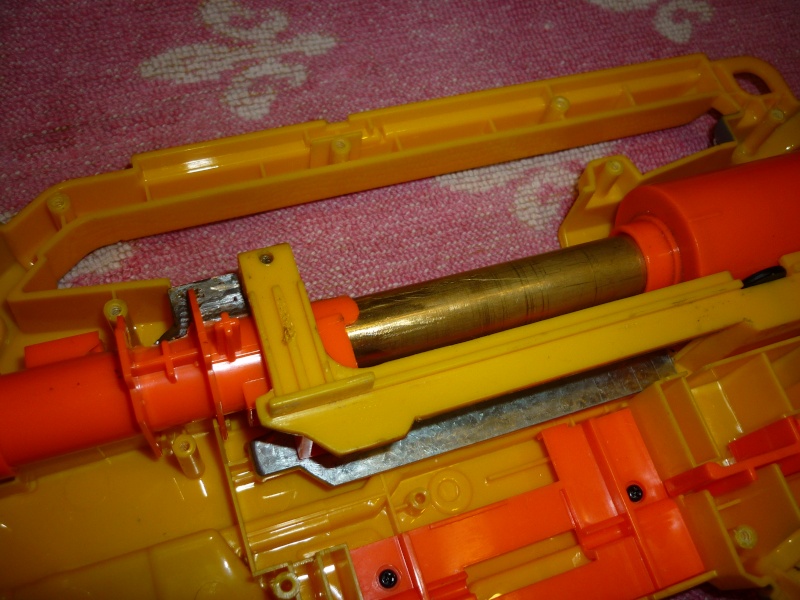 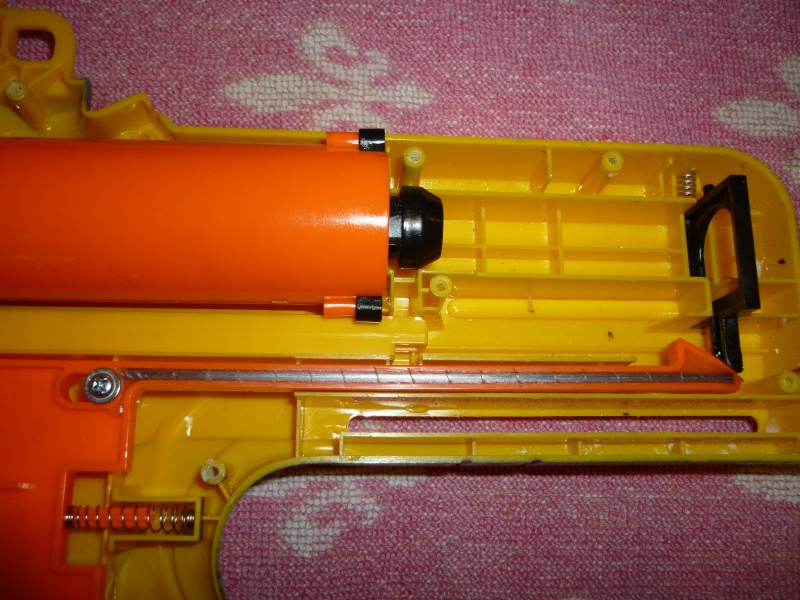 I used two pieces of ~2.5mm steel welding rod either side and some epoxy. 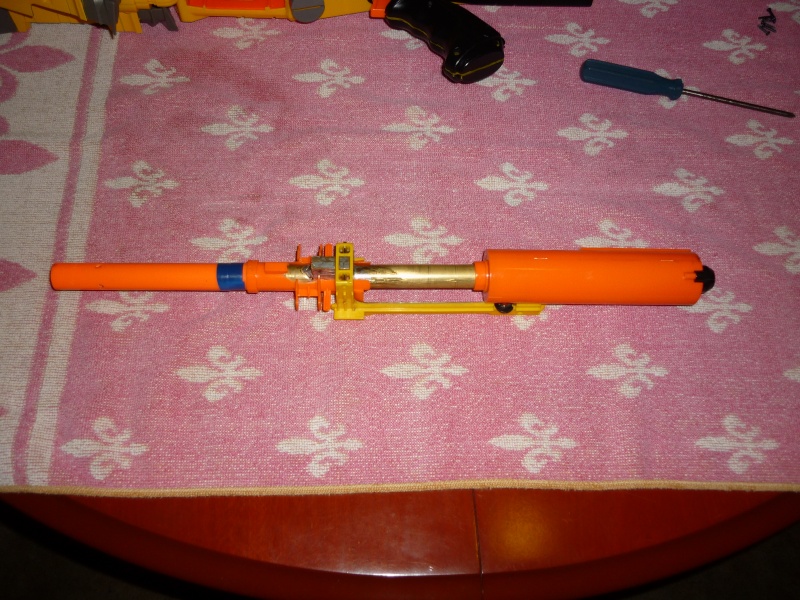 I like the fact that the whole assembly can be taken out in one piece. 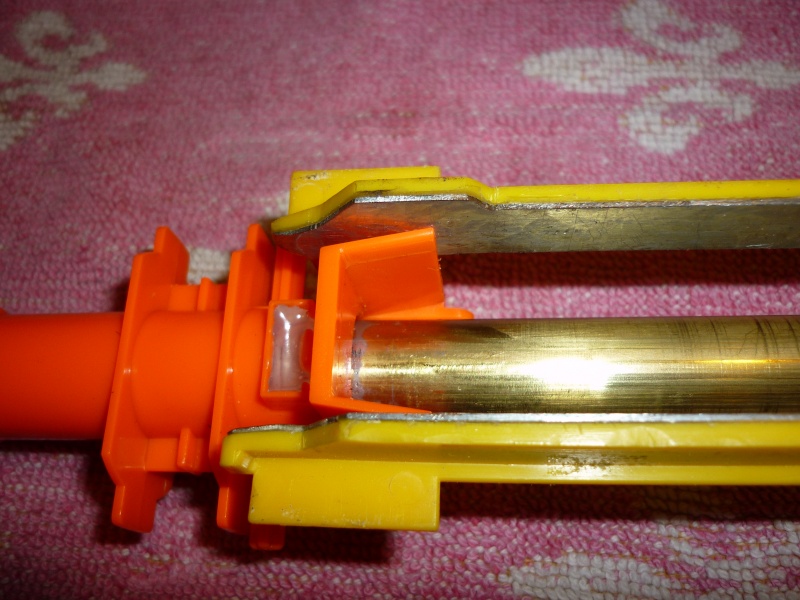 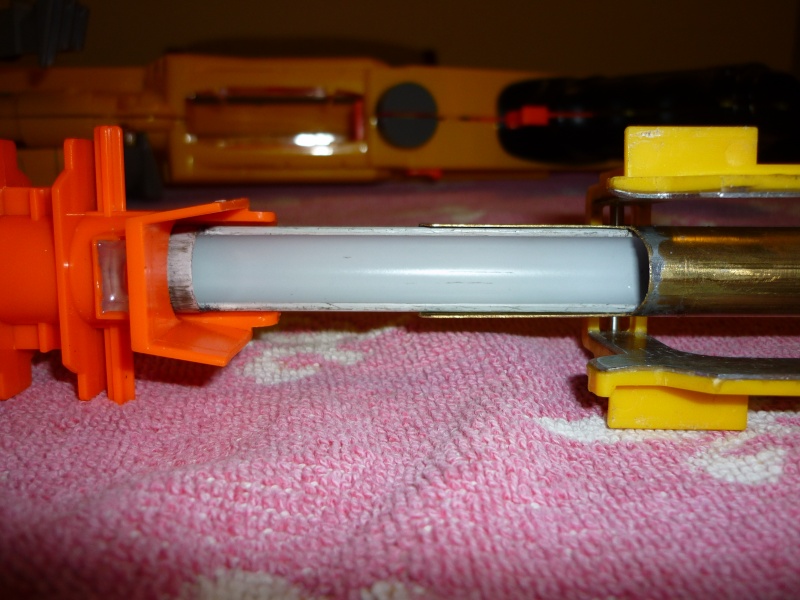 Between these two pictures, you should be able to see how this works. The brass sleeves over the pvc and around the dart. It doesn't push the dart into the barrel, rather the air pressure upon firing does that. 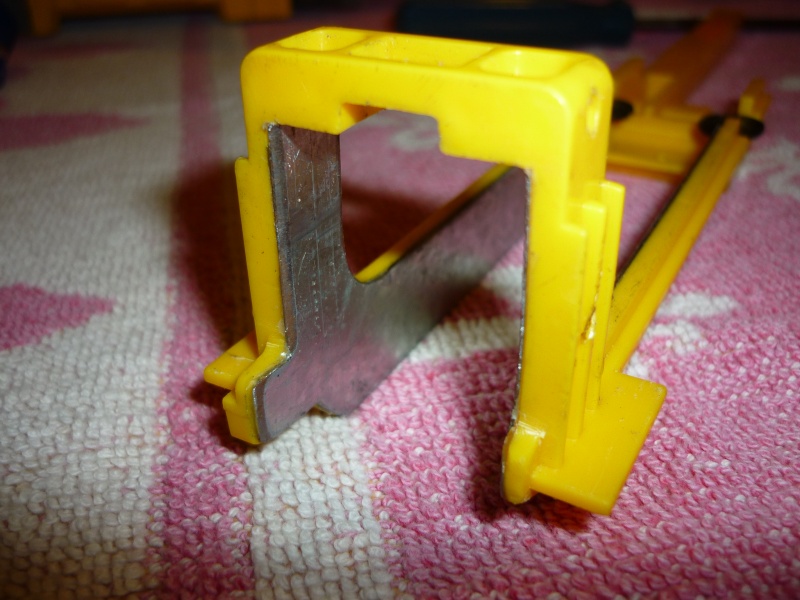 It's been reinforced with galvanised steel on both sides. I'm not sure of the exact thickness, though it is about ~0.2mm too thick either side as it rubs on the clips. As a result, I've had to curve the edges as you can see here. 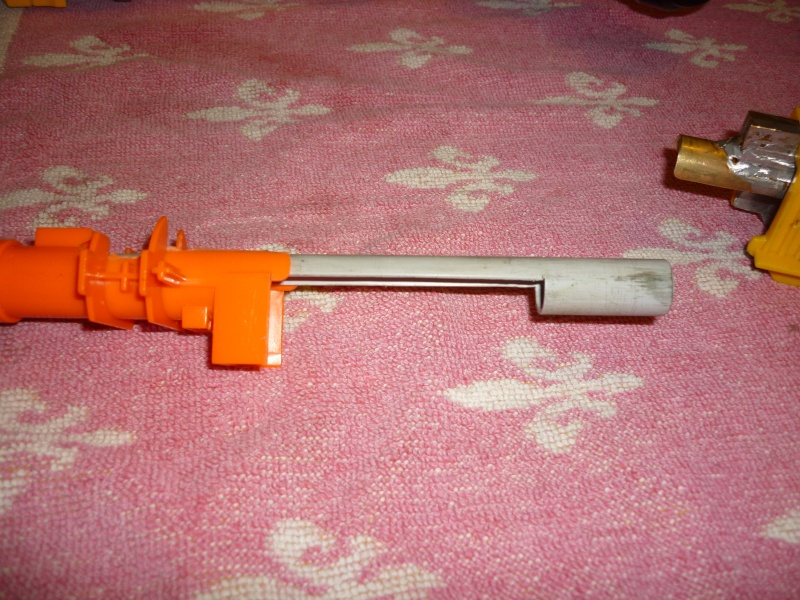 The barrel has been glued into the orange part to keep it stationary when moving the breech. 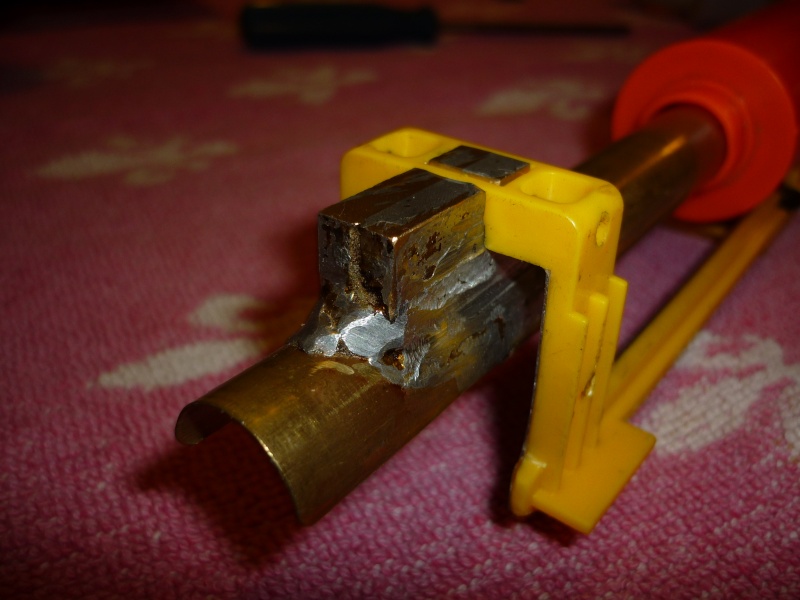 Here you can see that i've soldered a piece of brass onto the brass of the breech. I thought this would be stronger than epoxying plastic onto it (I've had bad experiences doing that before) and i could position the boltsled slots after soldering. 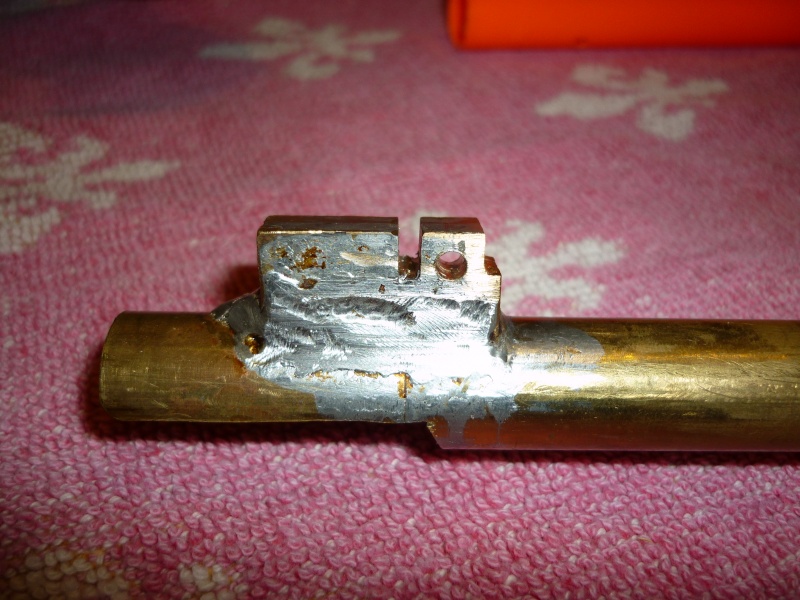 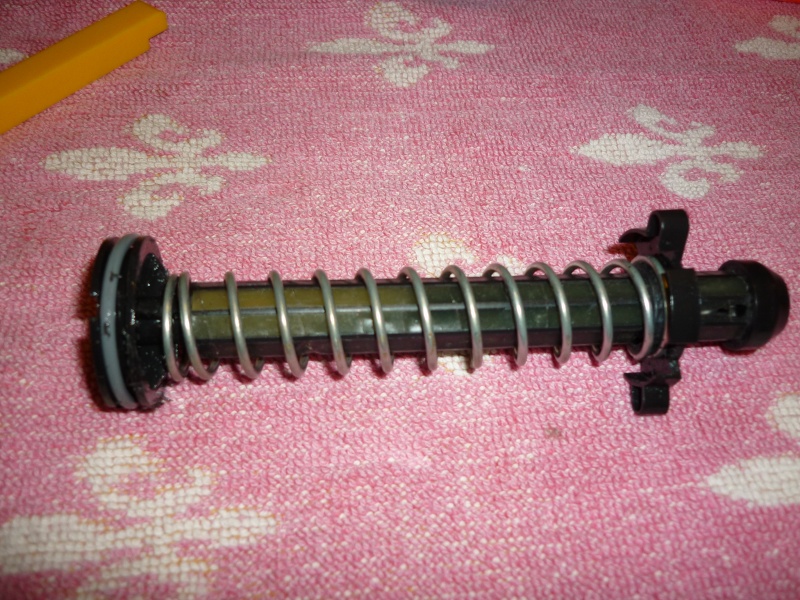 Note that i've filled in the entire length of the rod with epoxy for reinforcement. Also, the spring seen here is the down-tuned setup (11kg) i used at our local wars (which has turned out to be almost silent), since the mid-tune was too powerful. Mid-tune simply adds a stock LS spring to this one (~14kg). Later on, after i've finished more reinforcements, i will try adding a stock recon spring to that (~18kg). If that holds, i might even try for a black tactical recon spring (~21kg). 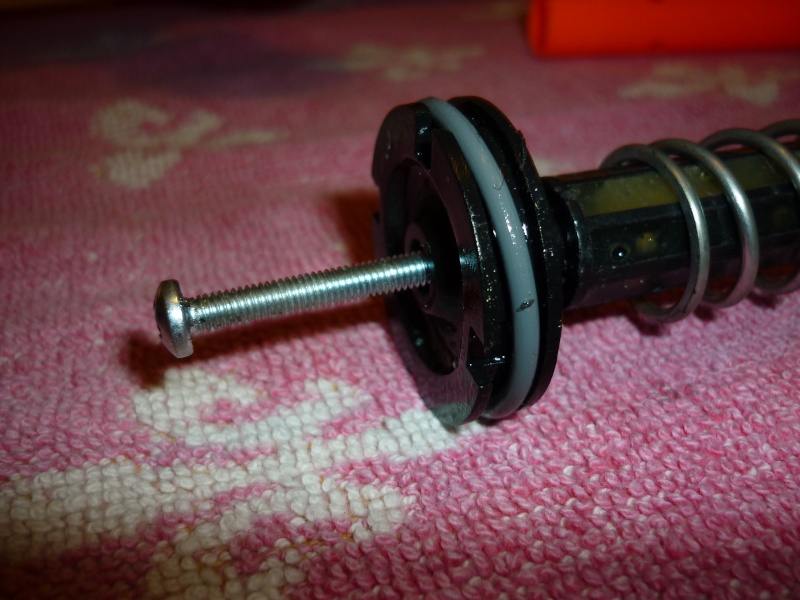 The screw I've added will hold far more than the stock screw. It goes much further into the rod than the stock screw, making use of all the epoxy i added to the rod. I've unscrewed in here almost all the way to demonstrate the length of the screw. I did this because i've seen several cases of the plunger head being pulled off by high spring loads. To add this screw, i used an m4 screw, drilled a 3.5mm hole and tapped for an m4. Unfortunately, tapping cause the epoxy to crack a little. I'm hoping it won't be an issue, otherwise, I'll need to re-epoxy it. 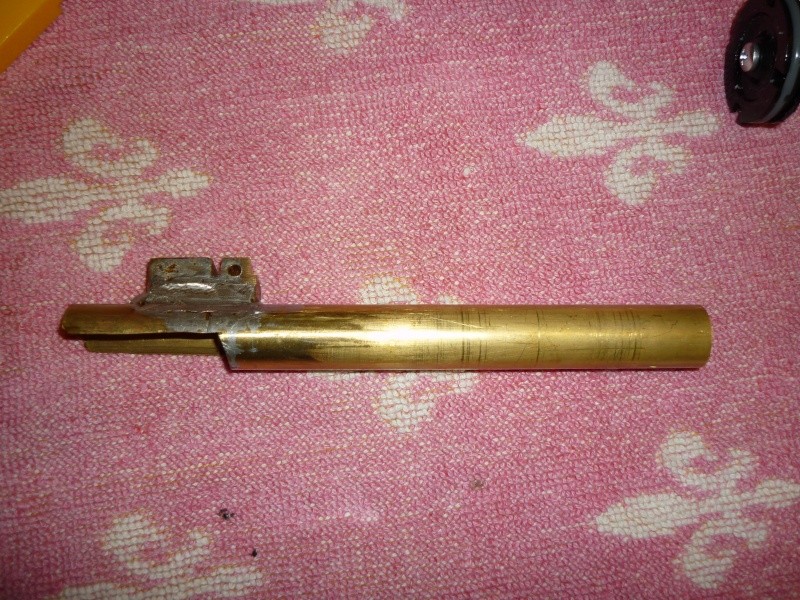 This is one of my favorite features of my new breech. That you can pull it apart, to service and clean it. Also, I've added a couple of O-rings in front of the normal black piece that sits inside the plunger tube on the back of this. One was a smaller one just over the brass to assist the seal and the other was the same size as the plunger tube to act as padding and further improve the seal.

Breech, assembled, outside the plunger tube: 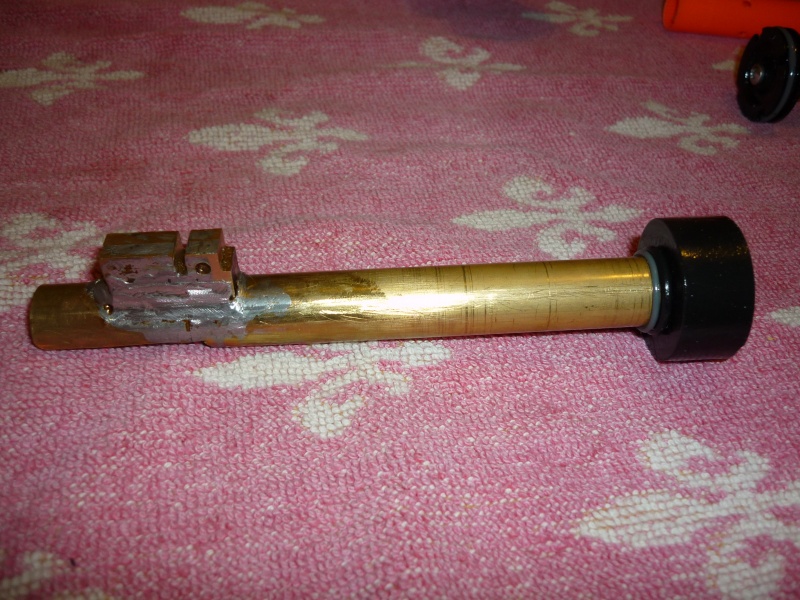 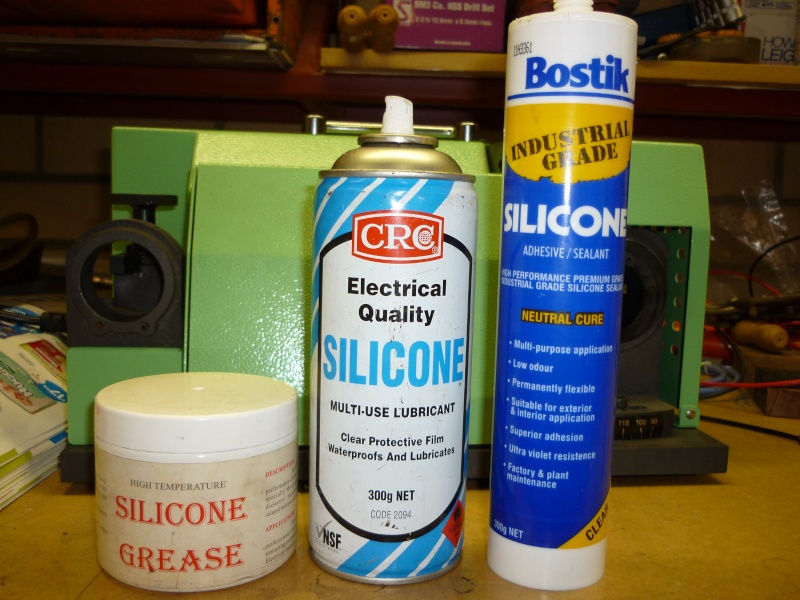 The small tube is silicone grease. This is an excellent plunger lubricant and works well to seal around O-rings. The spray can in the middle is silicone spray. I find this useful for lubrication moving parts such as the breech, boltsled, trigger and catch for smoother operation. And the tube on the right is the silicone i mixed with cornflour to make the stock filling (see top of post).


Alright, now about this new breech. The breech design I've come up with was ultimately inspired by hoppers and RSCB style clips where the pressure from firing the blaster forces the dart into the barrel. The reason I've used this feature is to allow the use of tighter barrel materials. I'm sure you've all seen forsaken angel's angel breech. You'll notice the use of tightening rings as opposed to tighter brass tube. In my experiments, attempting to make the same breech with tighter brass will almost always result in jamming and the dart crumpling. In this breech design, 21/32" brass sleeves over 16mm aussie pvc electrical conduit with an airtight seal. The brass slides around where the dart sits in the barrel, letting the pressure from firing the blaster force load the dart into the barrel. The same principal can be applied to pretty much any 2 sleeving materials, so for those of you outside Au, you could use imperial sizes of pvc and the corresponding size of brass, or you could use 17/32" brass and the size up from that (9/16").
Also, please note that as far as my research has shown, this is an original design. If I am incorrect and it is in fact not original, please let me know.

I've just realised i don't really have pictures of me making the breech to explain how to make it, so I'll have to take apart another longshot to get photos of that which i should be able to do soon.

Also, if anyone wants one of these breeches commissioned, just PM me.

That's sick! Definitely having a go at that.

What size brass is it?
How long is the barrel? Did you try multiple lengths?
littlebro05

Keen to see how you made it :D. That spring looks real beefy as well.
Ungodlyfreak

Jeo wrote:That's sick! Definitely having a go at that.

What size brass is it?
How long is the barrel? Did you try multiple lengths?

It's 21/32" brass over 16mm electrical conduit, the largest size of brass i could get.
I did try multiple lengths. When i first made the barrel, i didn't really think about measuring it. Afterwards, i measured it and it turned out to be 220mm from where the dart enters to the end. This turned out to be too long. After chrono'ing and cutting the barrel down, I got better results witha shorter barrel (160mm).
Also, got velocities of ~47m/s.
Posting from a laptop without the rest of the pic on it, so like i said, i'll be posting more when i can.
Echoes

I used a very similar concept for one of my BBLS's. The RSCB + Inline clip theory definitely works, with massive improvements in the loading mechanism of the brass breech. I have personally not had a jam using a design like this (however mine was completely brass).

Just note, that 17/32 with informer's blue foam in a foot long barrel doesn't work very well... It's a bit too tight. I've opted for 9/16 with a pretty huge tightening ring in it to keep the dart set in place. Good job!
Acerised

Doesn't look like its going to break and soon. Good job.
Ungodlyfreak

Echoes wrote:I used a very similar concept for one of my BBLS's. The RSCB + Inline clip theory definitely works, with massive improvements in the loading mechanism of the brass breech. I have personally not had a jam using a design like this (however mine was completely brass).

Just note, that 17/32 with informer's blue foam in a foot long barrel doesn't work very well... It's a bit too tight. I've opted for 9/16 with a pretty huge tightening ring in it to keep the dart set in place. Good job!

I've dropped the 17/32 barrel for now, but I could easily go back to it. I suspected that it was too long but I never bothered to cut it down to experiment (Was kinda lazy and the 9/16 was working just fine). If I ever have the time, I might revisit it and see what it can do.
Sponsored content