I've been trawling google for a few hours for a solution to this and lack the bandwidth to do a youtube search, so bear with me if this is easily answered.

From what i have seen it is a fairly simple task to join two belts together to form a 50-dart belt with a blank in the center joining them, but what of belts longer than this? Written instructions are rather vague on the specifics of joining a belt onto this 50-er, spouting things like "repeat this process for longer belts" , despite having no blank to work with on it.

This method also presents the problem of the first dart not being fired, as the vulcan feeds the belt in before firing (if fired properly. I'm sure somebody will wrestle the belt into the popped out AR to prove me wrong).

So put simply, is there a way to join non-blank ends of belts together? Or are belts of more than 50 darts a myth?
JeremyArifin 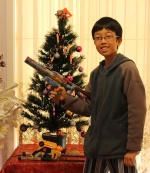 Here is the answer for your troubles:

Voilà! Your done! Now do the same to another belt and you have a 75 dart Vulcan belt!
Hope this helped your troubles!

Marvelous, that link was a great help!
JeremyArifin

No worries!
Glad I helped!

I wouldn't bother getting rid of the blank, as it's the easiest way to join belts.

If you're doing this, I'm tipping you're going to glue the clutch, up the volts, etc.

You won't even hardly notice the one blank shot then (no jokes about shooting blanks please).
Sponsored content