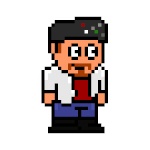 Okay,I have discovered something I'm sure you already know; Stock standard streamlines do not go straight. So why then do the sucker tipped nerf darts not only go further, but also STRAIGHTER than the streamline? GAH! The part of me that did Aeronautical Engineering and Advanced Physics is screaming right now.

Okay, not really (that's not really to the screaming, I did actually take those two classes, I also build and fly remote controlled aircraft, and yes, I'm working on a plane-mounted nerf). I understand the basics of "Streamline=light, Sucker=heavy" and it's harder to budge a heavy object at a given velocity than it is a light one at the same velocity. So small gusts of wind, and in general impacting the big block of unmoving air outside the nicely guiding barrel would send a light round a little off course. But the tip of the sucker dart is concave, it should technically be slower (think a mini rubber parachute on the tip of the dart).

At the moment I like using the nerf-stock-sized darts. I'd rather not mod my clips and such to take stefans, and until I actually mod a stefan-specific gun I'd like to avoid making them. I've heard a lot of threads where people have used everything from lead fishing weights through to hot glue inside the Streamline tips. I'm sure the former may cause a little contention with headshots, and I'd rather not test my guns with them; If I can hold it to my temple point blank and fire the gun without drawing blood, I consider it "safe" to game with.

I understand most people use stefans, but I'm sure there are a few people out there who - at some point - modded some stock nerf streamlines for better performance. I did look back through a lot of threads, but if any of them mentioned information of note, it was generally just a passing comment rather than an actual comparison. So to those who have experimented; What did you do, how did you do it, and was there a decent result?

pull off the stock streamline head and replace it with that which you would make on a stefan.
-Aj-

ok, so not wanting to be a bitch but basically the Adelaide guys are the boss at this.

I started making CDTS's, like WV17 has mentioned above... but went wait, this can be done better.

Streamlines are the most abundant of all nerf ammo in Australia. Kmart sells 10 packs for $3.99, and flip clip packs can be had for $23.99, which include heaps of extra darts.

Depending on which gun you're using them with, do one of the following

You can now bend this 'flap' up and fill the streamline tip with hot glue. Put a small ammount extra on top and now press the 'flap' back into place, making the dart appear to be an unmodified streamline. the better you can recreate the original shape of the tip the straighter the darts will fly.

Same as above, except before filling with hot glue, use the tip of your glue gun or a soldering iron to melt a small recess in the base of the streamline tip, taking much care to center it. glue a 00 splitshot sinker in here, then fill with hot glue, replace tip etc


may sound complicated.. but I'll try and get some photos up tonight.. to much to do right now...

these are literally the best darts you can make out of a stock streamline.


On your query... it seems obvious to me.. suctions do not go as far as streamlines because of the increased drag, but the weight makes them go straighter. Streamlines are so incredibly unpredictable because of the small air hole in the side - causes unpredictable drag and can catch small air currents, feeding the air into the tip of the dart and thus altering its course

Thanks for the responses guys. Off to buy some more hot glue sticks (and attempt to find the gun itself) tomorrow and I'll see if I can find some sinkers at one of the - few - tackle shops around.

Technically not necro because I have useful info, though it is months old.

Have hot glued my darts now using Aj's method and they work a treat (thanks dude, extremely helpful). Though I have discovered that the Maverick really doesn't like the new darts. They don't go nearly as far, but they are straight as an arrow. Have also used them in a modded Big Blast to devastating affect.

Tried the 00 sinkers, and they were amazingly straight, but just couldn't go the same distance as teh ones that were just glue. They also hurt a lot in my "safety" test (see op) so will leave them be. Might need to try it later on for other guns (kept 6 '00' ones for testing purposes).

Have been a little unwell over the last few months, and coupled with having moved house (location of guns is not the same as all of my tools) has meant very little nerfing, getting back to it though with some interesting projects on the horizon.

Having trouble finding decent barrel material, But I'll leave it to another thread (I'll lurk more).