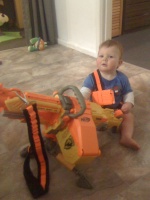 Hi just got mine today and had a play with it will say very cool gun.

Very basic concept and packaging just the gun and darts.

Has attachment for stock and 1 tactical rail. Weighs as much as a recon or maverick fully loaded with the 3 AA batteries. Easy to reload just turn on the gun, slide jam door back and you use the trigger to rotate the barrel load from bottom.

Now for you people worried about the noise it isn't as bad as you think, I was quite surprised at how quiet it was, compare it to the Tommy 20 it is much quieter. The on off button acts as a safety so trigger can not be pulled and jam darts.

As for distance out of box not that flash at 25-30ft but I plan to mod mine the se as SG nerf and get about 50-60ft which is good. The mod can be found under modworks.
It's about the same size as a maverick too so great duel weilding potential.

After modding I think it will become the stampede killer

In conclusion I give it a 8 out of 10.
ShootEmUp

There alright I opened mine up to see if there's anything else that could be done, other than the e-tape around the wheels and a voltage mod, but Eh that was it. Not much modding potential, that's why I have already sold mine.
Psykka

Make it feed clips! Best mod you could do.

Psykka wrote:Make it feed clips! Best mod you could do.

this is what mod works has done so far
http://modworks.blogspot.com/2010/09/nerf-barricade-mod-guide.html
Dgenx101

Adding a clip wouldent be to hard i dont think. Putting the pressure pad behind the trigger is great so you dont give away your possion to your opponent. I think that this blaster has a fair Mod rate.
Psykka

I think potentially the easiest way to mod it for clips would be to take the drum out of it and use a cut down longshot stock. That has a clip holder already. Some creative cutting a gluing with an upgrade of the holder spring and you could feed drums no worries.

I was thinking maybe a raider for side loading or recon for cheaper more compact option.

I guess it's up to what fits, but that's nothing a hammer can't fix lol

Yeah add a clip, but it will still only shoot 50-60ft.
Psykka

And so does the stampede when modded

it's not all distance in a war, especially when those snipe blasters mostly Shoot one shot then takes forever to reload, not much help if you have some one running at you semi auto with 60 shots up his sleve. I know my pick
ShootEmUp

Psykka wrote:and what's wrong with that range? if you are relying on having 100ft+ ranges as a crutch then you aren't a very good nerfer.

Psykka wrote:and what's wrong with that range? if you are relying on having 100ft+ ranges as a crutch then you aren't a very good nerfer.

I like to squeeze the best I can out of it. and I think 60 is about the best it can do. Modding potential isn't all about range.

Yeah Modding potential isn't always about range, But its a big part of it. To get 60ft out of is easy, witch is probably good for you. Spending 10 minutes on tapeing up the wheels and adding some batteries is boring, and if that's what you call modding, you have fun with that.
mattman280

Think you hit a nerve
Rees85

Got one the other day. The sound gets really annoying after a while and the gun lacks oomph,but modded it could be something decent.
Not worth the price though not at all.
Psykka

I like to squeeze the best I can out of it. and I think 60 is about the best it can do. Modding potential isn't all about range.

Yeah Modding potential isn't always about range, But its a big part of it. To get 60ft out of is easy, witch is probably good for you. Spending 10 minutes on tapeing up the wheels and adding some batteries is boring, and if that's what you call modding, you have fun with that.

Psykka wrote:No I don't. I'd replace the motors and shit. but 60ft is pretty good for a semi auto pistol that is as light as a barricade. Considering how little effort you have to put into it.

You just said that perfectly, Its easy to get it to those ranges. I don't like that, i prefer something that i can muck around with a lot and get it to be a respectable blaster.
Psykka

Psykka wrote:Fair enough. I like to give everything a go and see how good it can become. There's plenty of hard stuff you can do to the barricade.

Cool, I cant wait to see your barricade, when you get it that is. Hitting Average 60ft+ consistently with a drum mag attached.
Psykka

Just as advice the Longshot and I think the recon both have removable clip wells so you don't need to put a whole raider side on it.

My thoughts were that you could remove the drum and drum holder and then use pvc to make a magazine holder so that the top of the magazine is exactly where the top of the drum is/was.
wouldn't that work for adding clips?

phuonguyen wrote:Of all the clip system guns, only the raider has a removable support for clips. Get your facts right before stating them.

The only problem that I can see with your mod, Psykka, is that you'll have to add some extra tape for the wheels to grip the streamline and to make the pushing mechanism only effect the single dart at the top of the clip. I reckon it could easily be done.

Nah phu he is right. I was intending to use the longshot stock. The grey bit that holds clips will work fine. The recon however was a silly idea.