From the last SFW war. I've now given up on the cover, no matter how much support I give (in a cheap price range) it still blows over. So, where could I host a SFW war where I don't have to put up cover and there is trees to hide behind as you advance? There aren't many places in Brisbane for that.

So after lots of google mapping I stumbled across this place on google maps. If you google map street view, you'l see there's a nice amount of trees that don't seem too far apart. 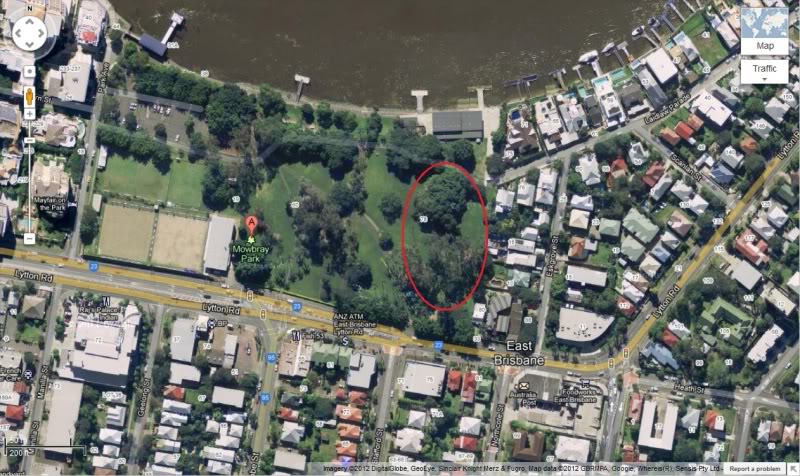 It seems to have good tree cover. Even if the trees are 'thin'. They still provide decent cover, while not overcrowding each other. This should encourage 'spread out movements' rather than 'hunched-up' 3 man in what cover. Also, means we can pack up quicker, and therefore a longer war day.

I'm going to call this Woodland Speed Foam Warfare, as all the central wars I host are to gain new members into the more powerful side of town. So Air Powered Blasters are banned. so hopefully we'll only occupy about 40x30m of land as I have a feeling it may get very busy.

At this point in time, I am unsure if this place becomes very busy on weekends (which it might likely will since it seems like a major park). So I will be checking it out on a sunday weekend. I will be doing some video footage of it and talking like a vlog sometime this week. Stay tuned.
Sairex

There's Colmslie Park too, not too much further away... Whilst not CBD-accessible, it's often quiet and is just off the Gateway...

Not that great for Public Transport though I just thought... Hmmmm....

also Victoria Park in the CBD; http://g.co/maps/sgxw2 quite a bit of trees/workout equipment that could be interesting, and it is quite a long park stretching from BGS/BGGS all the way down to the RNA Showgrounds/Old museum so plenty of real estate to utilise and is fairly quiet on weekends when I've seen it...
revo

Are we able to get some were with restrooms?
littlebro05

Well my aim is to make it as central as I can get it. Morning side is abit far east.

The Victoria park looks promising, but is there free parking? We generally mark out a field where we play. Fawk, I can't believe I missed such a big portion of park as well -_-.

Cover is the main concern, and from what I've looked, it seems to have some decent cover. I'll have to check it out when it's not bloody raining.
night stalker

So is this were we are going to the next nerf war if so can we use long rang wepons?
Sheepie_125

At least I hope I don't think it is. I should be able to check out this location tomorrow if it isn't raining at Mowbray Park.
Sponsored content